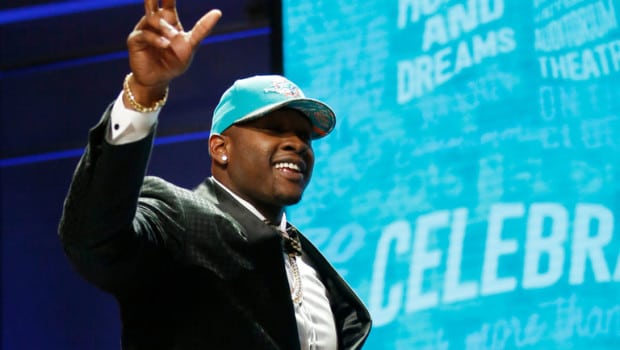 For months Mississippi offensive lineman Laremy Tunsil was touted as the likely No. 1 pick in the NFL draft, and after last week’s Rams and Eagles trade no worse than No. 3.

Then a video surfaced that froze NFL GMs.

Minutes before the draft was scheduled to begin last night, a video was posted on Tunsil’s Twitter account that appeared to show the player Tunsil inhaling what might have been marijuana through a bong that was attached to a gas mask.

It was unclear when the video was recorded. No matter, the damage was swift and highly visible for Tunsil: He was in a draft free fall, passed over by each of the first 12 teams.

Finally, with the 13th pick in the first round, Tunsil was selected by the Miami Dolphins. Dolphins general manager Chris Grier said the team had been aware of the video’s existence well before the draft and said it was two years old.

The video probably cost Tunsil millions of dollars. The No. 1 pick in this draft is projected to receive a contract worth more than $25 million. The deal for a No. 13 pick will be about $12 million.