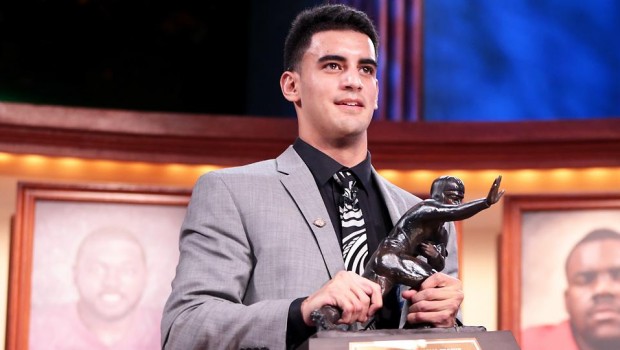 You want to know how lame the Washington Redskins are?

The well-mannered Marcus Mariota, who will meet with any team that asks, won’t be coming to DC because the two sides were unable to nail down a suitable date, according to the NFL Network.

Team brass and Mariota’s representatives had discussed a potential pre-draft visit, and general manager Scot McCloughan and coach Jay Gruden said they wouldn’t rule out the possibility of drafting the quarterback if he were to fall to them at the fifth overall pick.

However, a meeting at team headquarters between now and the April 30th draft will not end up taking place, a person with knowledge of the situation confirmed.

McCloughan did attend Mariota’s pro day in Oregon last month, and also watched him work out at the combine in February.

Although uncertainties loom over Robert Griffin III following struggle-filled 2013 and 2014 campaigns, and despite McCloughan and Gruden’s statements about the possibility of taking Mariota, multiple league insiders have called it unlikely that the team would use such a high pick on a quarterback because of more pressing needs at outside linebacker, along the offensive line and in the secondary.

Others also called it unlikely that Mariota would even still be on the board by the time Washington picks. The Tennessee Titans, who hold the second overall pick, are in need of a quarterback and have met with Mariota both at the combine, following his pro day, and also has scheduled for him to visit their headquarters between now and the draft.