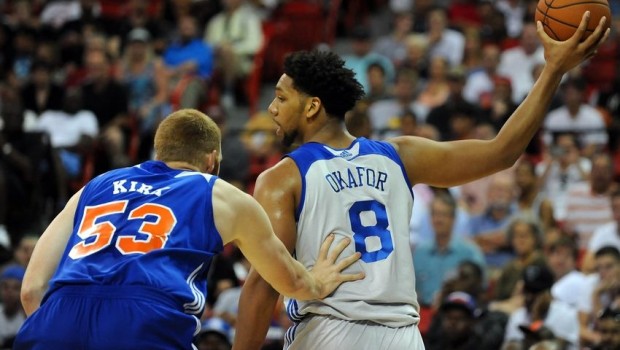 The lame-ass Philly media have retreated to their predictable corners in reacting to the Sixers drafting Jahlil Okafor (above, last night against the Knicks), Joel Embiid’s second surgery and just about anything that GM Sam Hinkie has done.

It’s almost as if the Amen Chorus of Angelo Cataldi, Dick Jerardi and John Gonzalez felt comfortable with the mediocrity that the Ed Snider-owned Sixers were serving up every year.

Jerardi and Cataldi have doubled down on their witless claim that Hinkie is a “fraud” (it is ironic that Cataldi, the biggest fraud in Philly in a century, has the balls to use that term), while Gonzalez still maintains that Okafor is a flawed No. 3 pick because of his alleged defensive difficulties and his terrible foul shooting.

Gonzo is just too young to have seen a couple of Hall of Famer centers named Wilt Chamberlain and Bill Russell, whose lifetime percentages from the foul line were 51.1 and 56.1 percent, but he sure saw Shaquille O’Neal’s splendid career in spite of his 52.7 percentage!

No matter. Okafor looks like a world-beater in the Summer League, so who are you going to believe: Gonzo or your lying eyes?

For those of you who want a more informed opinion of the Sixers, I offer up Grantland.com’s Zach Lowe:

Few teams have tried to minimize the role of luck as thoroughly as the Sixers, who don’t appear interested in any team-building path they can’t control almost completely. They haven’t traded for any veterans they see as part of the long-term picture, and for the third straight summer, they sat out free agency. Several executives gathered in Vegas for summer league have asked a version of the same question:

“When will the Sixers rejoin the NBA?”

That question took on renewed urgency when news broke that Embiid will miss another full season. Philly’s best hope of a transformational superstar might be the next Greg Oden, and people have wondered, “The draft is no guarantee; do Philly’s owners really have the stomach to just keep doing this?”

They just might. They are the anti-Sarvers [he’s the Phoenix Suns owner], for better or worse. The team has been profitable during this extended downturn, per league documents obtained by Grantland; Philly pays no money into the league’s revenue-sharing system and receives the same luxury tax distribution as every other team that comes in below the tax line. The value of the franchise has at least tripled since Josh Harris and his private equity partners purchased the team in 2011.

And the main point of Philly’s unprecedented strategy is that it can absorb a blow exactly like Embiid’s foot injury. If your owners are only willing to punt on two seasons, you are at the mercy of lottery balls and injury luck. Blow one draft, or fall from no. 1 to no. 4 in the Anthony Davis lottery, and the teardown gives way to panicked spending toward mediocrity.

If Philly is really willing to do this for five, six, or seven seasons, it almost cannot fail. It will either land a superstar or draft so many good players that they will gather a solid NBA team. Brett Brown may check himself into an asylum before then, but if you keep getting lottery picks, you will eventually succeed. Even when Philly was on the clock at no. 3, it was on the phone with teams in the lower half of the lottery, working to secure another high pick, according to league sources.

Philly needs to nail the draft, because big-time free agents don’t appear willing to consider the Sixers until they start winning a respectable number of games. Some agents have even called around to other teams, trying to ignite trade talks that would get their players out of Philadelphia, according to several league sources.

The free-agency route is likely closed to them for now, and they just aren’t good enough to flip their massive pile of trade assets for a star with only one or even two years left on his contract. Why would that guy stay?

Philly’s owners know this, which is why they trust a process they can shape more than “normal” teams like Phoenix will ever be able to shape free agency or the trade market. But you can only do that if the owners let you.