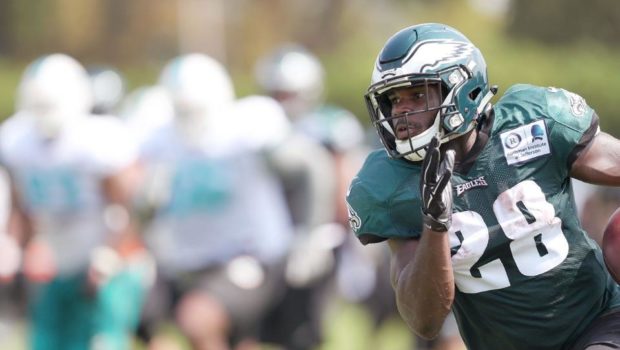 LAME-ASS LOCAL MEDIA HAND-WRINGING ABOUT EAGLES, NATIONAL EXPERTS NOT SO MUCH!

One need only listen to sports talk radio in Philly for a few segments, twirling up and down the dial while cruising along I-95, for certain narratives to develop. Currently, there seems to be considerable hand-wringing and consternation over the state of the Eagles’ revamped offense, and whether or not the right cast is in place to aid quarterback Carson Wentz’s development.

There is some rancor over the lack of apparent chemistry between Wentz and new free-agent receivers Alshon Jeffery and Torrey Smith, in so much as that could possibly be displayed in two brief preseason outings for the first-team offense thus far. People remain unsure if Nelson Agholor can catch the football with consistency. There is open debate (on these airwaves; not in the Eagles’ facility) about whether running back LeGarette Blount should be on the team (he will be) — despite the fact he just signed there a few months ago — and Tuesday afternoon’s banter included whether or not the front office, which has already spent to the extremes churning over this roster the past 18 months, should try to reacquire high-priced back Shady McCoy (don’t bet on it).

Pleasing the Philly sports fan ain’t easy — never has been; never will be — and there is a unique passion that comes with the professional sports scene in this city. When all of that energy is seemingly pointed in a singular direction, as it is now with expectations rising for the Eagles and the Phillies still mired in a rebuild, then the climate can ratchet up even higher. Let’s just say that when the Eagles host the Dolphins Thursday night in the final preseason game in which starters will largely appear, the fine denizens of this area will be anticipating a superior showing from this offense, and barring such, the angst between now and Week 1 will only rage on.

“I think the biggest thing is how effective are we on offense,” said Wentz, who flashed his elite potential throughout two days of practices with the Dolphins this week. “Are we staying ahead of the chains? Are we converting third downs? Situational football is such a huge part of this game and that’s what we’re all critical of. How are we doing in the red zone? How are we doing on third down? Discipline and penalties — we’ve got to avoid that stuff … We just want to be sharp with our situational football at the least.”