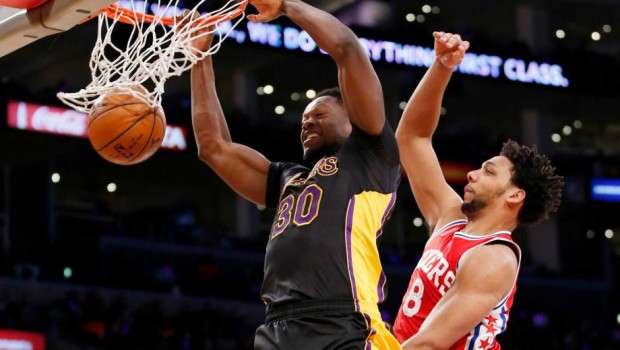 There are scads of ex-Sixers all over the NBA, and they all have an incentive to step up their game when Philly comes to town.

Williams, who played his first seven NBA seasons in Philly, hit a pair of 3-pointers and a 20-footer during a 15-2 run that gave the Los Angeles an 88-72 cushion with 4:21 left. He scored 12 of his 24 points in the fourth quarter Jordan Clarkson added 19, leading Los Angeles to a 93-84 victory over the Sixers.

Julius Randle (above) scored 15 off the bench for Los Angeles in a matchup between teams with the NBA’s two worst records. The Sixers (3-32) and Lakers (7-27) have played each other four times in the NBA Finals, most recently in 2001.

Both teams shot less than 35 percent from the field through the first three quarters, with the Lakers holding a 62-60 edge. Nik Stauskas, the first player off the Sixers’ bench, helped them reduce an eight-point deficit to 73-70 on a dunk with 8:11 remaining after missing his first six shots.

Rookie forward Larry Nance Jr. had a season-high 14 rebounds and eight points for the Lakers on his 23rd birthday while playing on a tender right ankle.

”Adrenaline is a powerful thing,” Nance said. ”I felt it a few times here and there, trying to rotate on defense and move my feet. But other than that, I was fine. All I wanted for my birthday was a win, and we got that.”

Nerlens Noel had 15 points and 12 rebounds for the Sixers, who tied an NBA record with their 0-18 start before beating the Lakers 103-91 on Dec. 1 at Philadelphia.

”They caught us slipping in Philly, but I really didn’t think about that,” Williams said. ”We’re a young team and they’re a young team. Sometimes, teams beat us that we feel shouldn’t, so we didn’t care about answering them in this game. We just had to go out and get a win.”

Point guard Ish Smith had nine points and three assists in his fourth game since returning to the Sixers in a trade from New Orleans on Nov. 24.

”Ish and Isaiah (Canaan) struggled. They went 5 for 30,” coach Brett Brown said. ”We felt like our defense was holding the fort, but we weren’t able to make shots to break it open and their mobility at times got the better of us.”

Lakers point guard D’Angelo Russell and 76ers center Jahlil Okafor, the second and third overall picks in the draft, respectively, both came off the bench in their second showdown as pros after each started in the first meeting. Russell had six points and five assists in 26 minutes. Okafor had 12 points and four rebounds in 23 minutes.

Bryant sat out against his hometown team because of a sore right shoulder, the same one he had surgery on last January to repair a torn rotator cuff. That forced the NBA’s third all-time leading scorer to miss the final 48 games of the 2014-15 season.