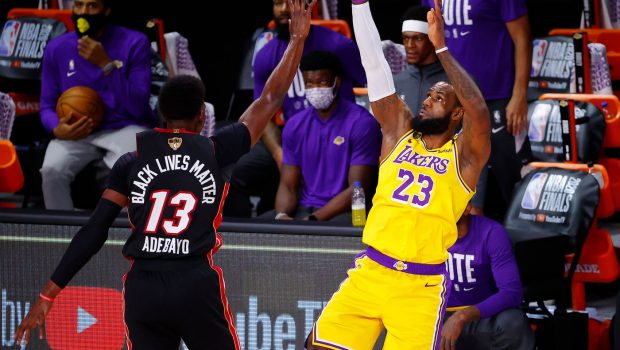 The Lakers took a 1-0 NBA Finals series lead over the Miami Heat with a 116-98 beatdown in the NBA’s bubble.

Kentavious Caldwell-Pope made two big 3’s, Danny Green added three of his own and the only player in the Lakers’ rotation who didn’t contribute a 3-pointer was Dwight Howard, and only because he didn’t bother trying. He could have launched from half-court and it might have found the bottom of the net.

This is not how the Lakers typically win. In fact, it’s usually how they lose.

Shooting is one of this team’s few vulnerabilities. The shooters on the Lakers are more effective at spacing the court for James and Davis than they are putting the ball in the basket. They relied on the 3-pointer in the regular season less than 22 teams, and their shooting percentage put them behind 20 teams. The Lakers don’t live by the three but risk dying by the three.

But they got hot against the Heat. After spotting Miami a 23-10 lead to start the game—“they smacked us in the mouth,” James said—the Lakers proceeded to outscore them by 45 points over the next 25 minutes. They were so flammable at one point in the onslaught that they made 11 of 13 threes.

The box score officially shows that the Lakers went 39.5% from deep, but it does not indicate that the game was basically over by the third quarter. Goofy might as well have played the fourth.

If there is anything to be learned from James’s 10 appearances in the Finals, though, it’s the importance of not overreacting to the first game. He’s won Game 1 and lost the series. He’s also lost Game 1 in every series that he won.

The more troubling developments for the Heat were the injuries to two of their best players. Goran Dragic, their leading scorer in the playoffs, left the game with a foot injury. That would have been enough of a blow to their championship aspirations. But then he was followed to the locker room by superstar big man Bam Adebayo, who strained his shoulder and did not return. The severity of their injuries was unclear.

But nobody in this series has to be told that Finals are long, strategically fascinating and often unpredictable. Game 1 gets forgotten as soon as Game 2 tips. Miami will make their inevitable tweaks—and the Heat already have one defensive adjustment to bring the Lakers’ shooting back to earth without doing much of anything. Regression to the mean is a very powerful fire extinguisher.