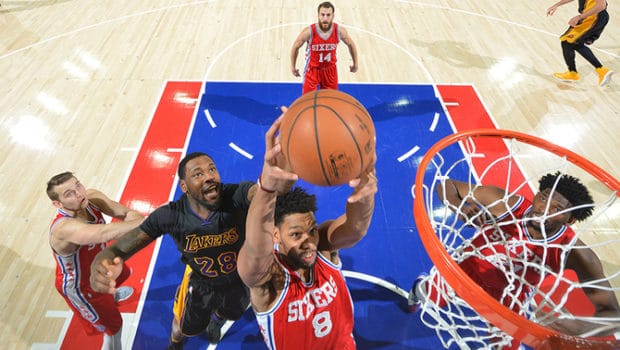 LAKERS JUMP SIXERS AT THE START, FINISH WITH 100-89 WIN

Julius Randle scored nine of his 25 points in a dominating first quarter and the Lakers snapped an eight-game losing streak with a 100-89 victory over the Sixers last night at the Wells.

Lou Williams added 18 points and D’Angelo Russell and Nick Young had 15 points apiece. They were playing the third game of a seven-game, 12-day trip — their longest of the season.

“It feels great,” Young said. “It’s tough coming in after every loss, putting our heads down.”

Joel Embiid scored 15 points for the 76ers. They have dropped eight straight at home to fall to an NBA-worst 6-20.

“We got jumped from the start,” Sixers coach Brett Brown said.

The Lakers scored the first 13 points against the 76ers, finished the first quarter up 30-18 and led from start to finish on the way to the rout. They blew the game open in the third quarter by tallying 15 of the first 21 points, taking their biggest lead on Young’s drive that made it 68-46 with 5:41 left in the period. The 76ers missed 10 of 12 shots to start the period.

The Lakers won for the first time since Nov. 30.

Philly had all three of its coveted big men — Embiid, Jahlil Okafor (above) and Nerlens Noel — available together at the same time for the first time.

Embiid, the third pick of the 2014 draft, missed the first two seasons with a foot injury. Noel was picked sixth in 2013 by New Orleans and traded to the 76ers. He returned Monday after recovering from offseason knee surgery only to sprain his ankle and miss Wednesday’s game.

Noel had two points in 8 minutes and aired his frustration afterward.

“I think I’m too good to be playing eight minutes,” he said. “That’s crazy. Need to figure this (stuff) out.”

Okafor, picked third in the 2015 draft, started alongside Embiid for the second time. He had 14 points.

The duo also started in Wednesday’s 123-114 loss to the Raptors and Embiid had his worst game as a pro, tallying a season-low nine points.

Embiid and Okafor didn’t look very comfortable together on the floor again. Both natural centers, Embiid moved to the power forward spot to accommodate Okafor.