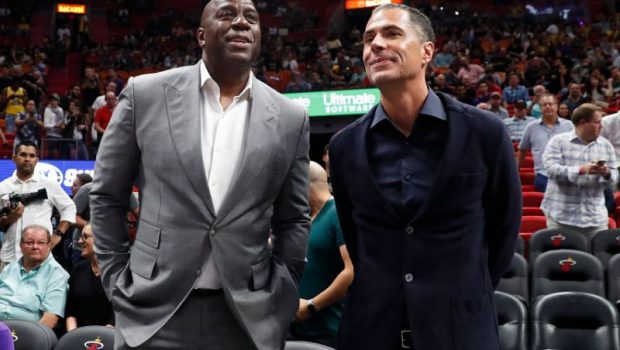 LAKERS IN DISSARAY: MAGIC BACKSTABS GM, WHO STABS HIM BACK!

Hours after Magic Johnson went on ESPN’s “First Take” to call out general manager Rob Pelinka for “backstabbing” him, among other histrionics, Pelinka met with reporters to push back against the Hall of Famer.

Early on Pelinka was asked to address Johnson’s comments. Pelinka spoke positively about Johnson, his former colleague who abruptly resigned as president of basketball operations six weeks ago.

But he did want to offer his side of the story.

“The two years getting to work side-by-side with Earvin were some of the greatest memories I have in sports. He’s an unbelievable person to work with. He fills the room with joy and vision. Truly, it’s saddening and disheartening to think he believes things that are misperceptions,” Pelinka said. “I think all of us in life have been through things where maybe there’s third-party whispers or he-said, she-said things that aren’t true.”

Pelinka said he has spoken with Johnson “several” times since Johnson stepped down from his role. Pelinka never got the sense that Johnson felt the way he expressed on ESPN.

“We’ve had many joy-filled conversations. In fact, two days ago we were reliving the combine, having the fourth pick and talking about the great future this franchise has,” Pelinka said. “So these things are surprising to hear and disheartening, but I look forward to the opportunity to talk with him and sit down with him and work through them just like in any relationship because they’re just simply not true.”

Throughout the press conference, Pelinka spoke of the positive direction he believes the franchise is headed. With the absence of Johnson, whom Pelinka said held “ultimate basketball decision-making authority,” Pelinka is now tasked with building a roster around an aging LeBron James.

The Lakers see themselves as big-time players on the free-agent market, but why would a star player want to come to a franchise that has exhibited such a high level of dysfunction throughout the year? Pelinka did his best to address that reality, a reality only exacerbated by Johnson’s comments.

“I think all we can do is do the work. If people take a look where this franchise is headed right now, we have a great coach, we have a high draft pick, we have a great young core, we have a superstar on our team and an open [max] slot. People can look at this as an opportunity to come and win a championship, possibly next year,” Pelinka said.

“Being concerned about the outside noise or the opinions is really not where our focus is right now. Our focus is on doing good work. We will put in the work to have an incredibly successful roster and team next year.”

Vogel said the perception that the franchise is wrought with disarray is “far from reality” based on what he experienced during the interview process. Ultimately, both said the best way to change the way the Lakers are viewed is by winning games.

“I think next year we will be a winning team,” Pelinka said. “That’ll end the noise.”