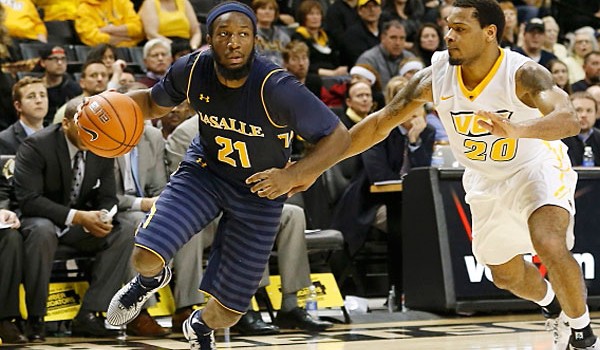 This is the kind of road victory that can jump-start LaSalle into the A-10 tournament next month with a chance to go deep.

And not only was it on the road but it was against a nationally ranked team.

Jordan Price (photo above) made a 3-pointer for his first points in nearly 13 minutes, and the Explorers had a break they needed in a 74-69 double-overtime victory at No. 20-ranked VCU.

Price, a transfer from Auburn who sat out last season, finished with 34 points, including 12 in the second overtime. He also grabbed 18 rebounds and had five assists while playing 48 of 50 minutes.

“He was absolutely terrific,” Giannini said of the 6-foot-5 redshirt sophomore, who made 10 of 22 shots, including half of his 10 3-point tries. “His rebounding was huge and he made gigantic shots.”

The Explorers (14-10, 6-5 Atlantic 10) handed VCU just its third home loss in 32 games, and avenged a double-overtime loss last year on their home floor against the Rams.

Price hit the tying 3-pointer with 29 seconds left in regulation, and when Melvin Johnson’s driving shot missed for the Rams and a tip-in try at the buzzer also missed, it forced overtime. Price did nothing in the first extra period, then took over.

In the second extra period, Price hit a 3-pointer and scored on a drive, then followed a free throw by Lewis with one of his own, giving the Explorers a 68-63 lead.

In the first overtime, D.J. Peterson and Wright scored inside to give the Explorers a 58-54 lead, but Lewis hit a runner in heavy traffic and then made a pair of free throws after getting clipped on a drive with the shot clock winding down.

Baskets by Roberts and Amar Stukes briefly gave La Salle two-point leads, but each time, Lewis tied it from the line.

VCU led 54-51 after two free throws by Johnson with 3:35 to play in regulation, and neither team scored again until Roberts’ miss was tapped out and found its way to Price to the right of the key with 29 seconds to go.

The Rams played for a final shot by Johnson, but it missed and a tip that didn’t fall likely wouldn’t have counted.