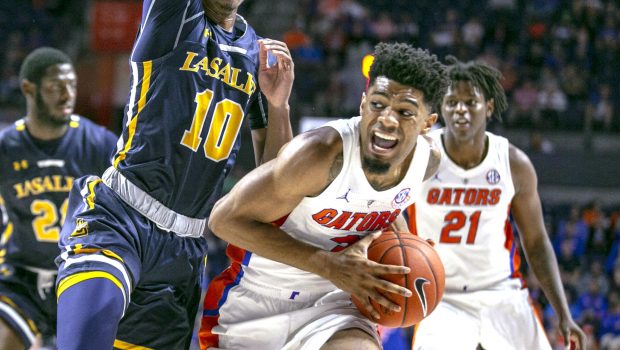 LA SALLE FALLS TO FLORIDA AND FALLS TO 0-3!

Kevarrius Hayes scored seven of his 12 points during a key 11-0 second half run as Florida pulled away to beat La Salle 82-69.

Pookie Powell led La Salle (0-3) with 21 points. The Explorers were playing their first game against Florida since Dec. 18, 1989, a game La Salle won 76-69 behind 33 points from former All-American Lionel Simmons.

After La Salle guard Traci Carter cut Florida’s lead to 42-35 early in the second half with a 3-pointer, the Gators answered with 11 straight points. Hayes, who played just five minutes in the first half after picking up two early fouls, scored seven of the Gators’ 11 points during the run on three inside baskets.

Keyotnae Johnson finished the run with a dunk in a transition, putting Florida up 53-35 with 13:40 remaining. From there Florida pulled away, leading by as many as 24 points in the second half.