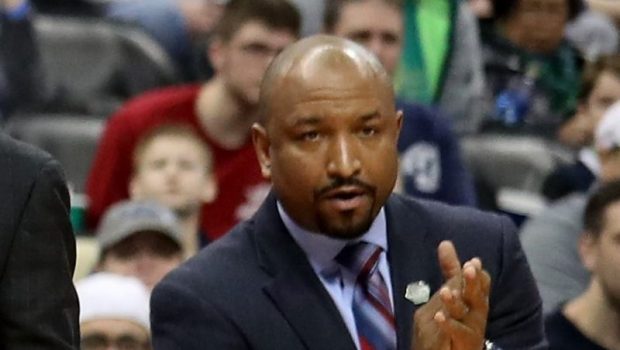 It was a tough night for La Salle up in Olean, NY, where they played St. Bonaventure.

And coach Ashley Howard got tossed..

With 7:45 remaining in the first half, the Bonnies and the Explorers were tied at 24.

That’s when La Salle head coach Ashley Howard had seen enough from this particular officiating crew. After what Howard thought should have been a foul on the Bonnies when his team missed a 3-point shot, the La Salle coach unleashed into a profanity-laced tirade. In an empty gymnasium, everything could be heard clearly. Howard made it known that he thought the no-call was “bullshit!” several times before he exited to the doors left of the student section. Not even a minute later, he returned for more, this time from the doors right of the student section, adding before leaving, “That is a fucking disgrace!”

Precisely, that happened. After the under-eight timeout, guard Kyle Lofton sank all four of his free-throw attempts, a byproduct of Howard’s double-technical, to give Bona a 28-24 lead. In all, Bona outscored La Salle 21-11 from the 7:45 mark on to take a 45-35 advantage into halftime.

Lofton scored 12 of his 18 points in the 86-63 victory over the Explorers to improve the Bonnies’ record to 10-2 overall and 8-2 in the Atlantic 10 Conference, which they lead. The junior who leads the team in scoring had both of his 3-point makes on the night inside those seven-plus minutes, including one as time expired in the first half — a devastating blow for the Explorers. His other two points came on an easy layup.

La Salle converted on just two of its field goals from the 7:45 mark on. The Explorers made plenty of 3-point shots on the night —12 of them — but did not register one in that run of play. Seven of La Salle’s 11 points in the final minutes of the first half came from the free-throw line.