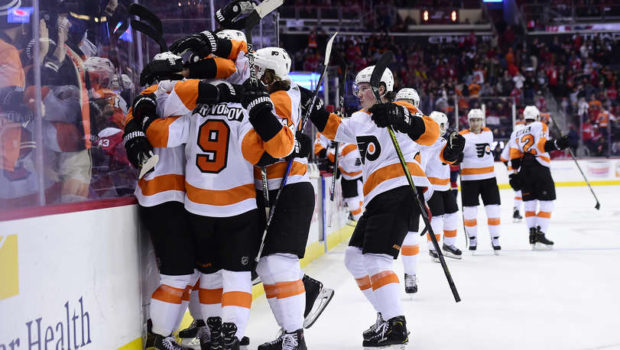 Travis Konecny scored 27 seconds into overtime to give the Flyers a 2-1 win against the Washington Capitals.

Michael Raffl scored, and Brian Elliott had 27 for the Flyers (23-16-8), who have won seven of their past eight games, including three straight.

“It’s huge,” Konecny said. “Coming in here and getting a win, it definitely says something about our character. There’s just that vibe in the locker room right now. We really want that playoff opportunity and we’re pushing for it.”

Alex Ovechkin scored his League-leading 29th goal, and Braden Holtby made 21 saves for the Capitals (28-15-5), who have lost three straight.

The Flyers have 54 points, one more than the New York Rangers for the first wild card into the Stanley Cup Playoffs from the Eastern Conference. It is the first time they’ve been in a playoff position since Nov. 10.

“We keep going this same track, we’ll keep plugging away at teams above us,” Elliott said. “We can be our best and worst enemy, I guess. We have to keep looking forward, not look at teams chasing us.”

Raffl gave Philly a 1-0 lead at 6:12 of the second period. He beat Holtby blocker side from the left face-off circle for his ninth goal of the season.

Ovechkin’s power-play goal with 16 seconds left in the second tied the game 1-1. He scored on a one-timer from the top of the left circle after a pass from John Carlson.

The Flyers killed a tripping penalty on Raffl at 14:40 of the third to keep the game tied.

Elliott made several key saves, including one on Ovechkin at 10:57 of the first period and a follow-up chance by Evgeny Kuznetsov. Elliott’s pad save on Nicklas Backstrom at 18:58 of the second period kept Philadelphia in front 1-0.

“[Elliott] was sure sharp tonight,” Flyers coach Dave Hakstol said. “As much as it is rest, sometimes it’s just a day or two of maintenance work. When you play as much hockey as he’s played for us, you don’t get those quality practice days. You forget the value of one or two days of good simple work.”

Konecny, 20, and in his second NHL season, scored for the second game in a row and has four goals and six assists in his past 11 games. He moved to the top line with Claude Giroux andSean Couturier on Dec. 23 after he had 10 points (four goals, six assists) in his first 35 games this season.