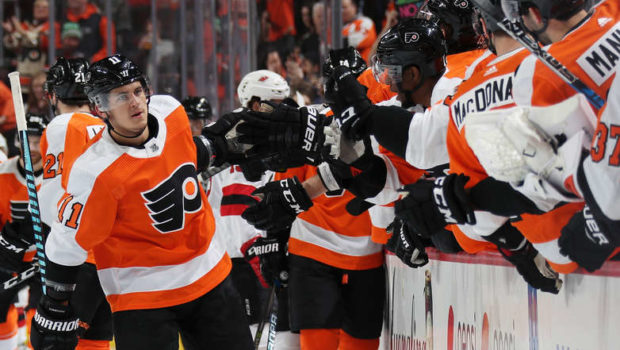 Travis Konecny had a goal and an assist and the Flyers defeated the New Jersey Devils 3-1.

Valtteri Filppula and Ivan Provorov also scored for Philly (22-16-8), and Michal Neuvirth made 28 saves for his 100th NHL win.

The Flyers are 6-1-0 since a 5-1 loss to the Pittsburgh Penguins on Jan. 2 and have won five straight games at home.

“We played a really strong game,” Konecny said. “We came out really hot, and that’s what we need to keep doing.”

“I haven’t noticed [Konecny] being more confident, but I think he’s more visible when he gets the puck, when he’s hitting those holes and getting into space,” Flyers coach Dave Hakstol said. “Having the opportunity to play with two good veterans (Couturier and Giroux) has been good for [Konecny].”

Shayne Gostisbehere got around Devils forward Nico Hischier in the neutral zone, carried the puck into the New Jersey zone and sent it across to Konecny, who scored from the right side at 3:29 for a 1-0 lead. Filppula put the Flyers ahead 2-0 at 8:30 when he scored from in front off a setup by Michael Raffl.

Provorov made it 3-0 at 12:15. Kinkaid stopped Konecny’s shot but couldn’t control the rebound. Provorov got inside position on Bratt and flipped the puck over Kinkaid’s right pad. Kinkaid remained down on the ice after stretching to stop Provorov but was able to skate off on his own.

Bratt scored a power-play goal at 8:12 of the second period.Taylor Hall had the secondary assist on the goal to extend his point streak to seven games. That ties the longest of his NHL career; he had a point in seven straight games from Jan. 6-Feb. 4, 2016, while playing for the Edmonton Oilers.