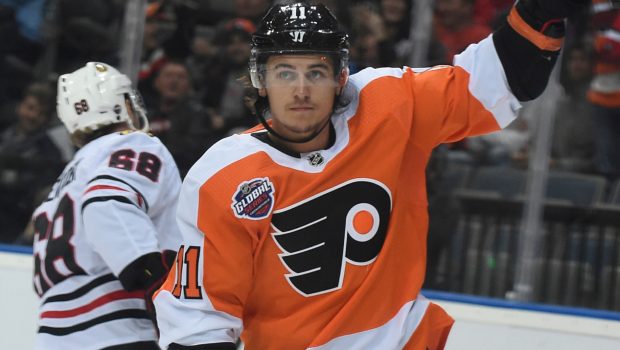 KONECNY BAGS 2 GOALS AS FLYERS GET OPENING WIN IN PRAGUE!

The Flyers should bottle this win and bring it back to Philly.

Travis Konecny had two goals and Alain Vigneault coached his first win as the Flyers opened the season with a 4-3 victory over the Chicago Blackhawks.

Oskar Lindblom and Michael Raffl also scored for the Flyers in front of a sellout crowd of 17,463 at Prague’s O2 Arena as part of the NHL’s Global Series. Carter Hart stopped 28 shots.

Konecny turned Gilbert’s turnover into a 1-0 lead 6:24 into the first, beating Corey Crawford on the glove side.

Lindblom was credited with a power-play goal 6:28 into the second when his shot bounced off the crossbar and was deflected by Koekkoek into his own net. Konecny then converted a backhander with 1:56 left in the period, giving the Flyers a 3-1 lead.

Chicago played without defensemen Calvin de Haan and Connor Murphy due to injuries.

“We turned way too many pucks over, that’s where we exposed ourselves defensively,” coach Jeremy Colliton said.

Vigneault became the 21st coach in Flyers history in April after they missed the playoffs for the fourth time in seven seasons. He also has coached Montreal, Vancouver and the New York Rangers.

He was behind the bench as Philadelphia held off Chicago in the 26th NHL regular-season game played in Europe, and the fifth in Prague.

The Blackhawks pulled within one when DeBrincat one-timed a pass from Kane past Hart with 13 seconds left in the second. It was DeBrincat’s first goal since he signed a three-year contract extension worth $19.2 million.

Raffl responded in the third, skating around the net and sliding a backhand between Crawford’s pads for a 4-2 lead at 9:48.

Kane scored with 2:07 remaining, but the Flyers held on.

Crawford finished with 34 saves. Nylander scored in the first period in his first game since he was acquired in an offseason trade with Buffalo.