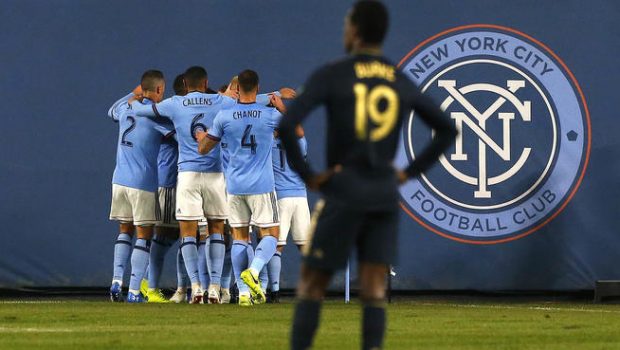 Maxi Moralez scored and had two assists to lead New York City FC to a 3-1 victory over the visiting Philadelphia Union in an Eastern Conference knockout round match at Yankee Stadium.

As the third seed, New York City advances to host the second-seeded Atlanta United on Sunday in the opener of a two-leg conference semifinal. The second match will be played at Atlanta on Nov. 11.

Ismael Tajouri-Shradi and David Villa had first-half goals for NYCFC, and Moralez made it 3-0 for NYCFC in the 78th minute with a chip shot from 15 yards over goalkeeper Andre Blake after receiving an overhead pass from Anton Tinnerholm.

Philadelphia didn’t have a shot on target until the 83rd minute, when Ilsinho passed to an unmarked Cory Burke in front of the goal to make it 3-1.

The Union have lost all four playoff matches in their nine-year history.

The Union had been so good not conceding early goals until playing NYCFC the past two matches. The Union had allowed three goals in the first 15 minutes through 33 games, but in the regular-season finale Sunday fell behind NYCFC 2-0 in the opening 10 minutes and never recovered in a 3-1 defeat that cost them hosting a knockout match.

Tajouri-Shradi made it 1-0 in the 10th minute with a 22-yard half volley after Moralez sent a long ball ahead to him for an in-stride strike.

Moralez and Villa completed a clinical counterattack for a 2-0 lead in the 26th minute. Villa got his fourth goal in four games with a shot to the far left corner after a deft first-touch.

NYCFC, which had a 2-5-3 mark in the final 10 games heading into the playoffs, improved to 13-1-4 on the tight field at home with a plus-28 goal differential this season.