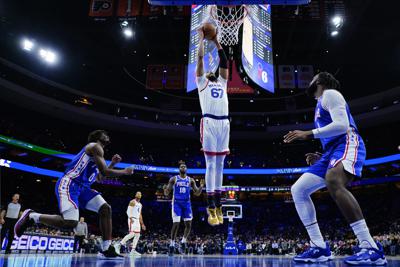 The Sixers may be gritty, running off to an 8-2 record before last night even though they have lost a ridiculous number of players to injury and COVID protocols.

But even Doc Rivers bunch couldn’t fight off the on-the-rise Knicks, who didn’t have to worry about defending Joel Embiid, who has contracted the virus.

Julius Randle scored 31 points to lead the Knicks to a 103-96 victory.

The Sixers were without four-time All-Star Embiid and three others due to the NBA’s health and safety protocols, which are for players who have tested positive for COVID-19 or been in close contact with someone who’s tested positive.

RJ Barrett added 15 points for the Knicks, who won their second in the last five.

Andre Drummond started in place of Embiid, and had 14 points and 25 rebounds. Furkan Korkmaz added 19 points for Philadelphia, which had a six-game win streak snapped.

The Knicks led by as many as 19 points in the first half and looked on their way to a blowout, but Philadelphia used a 25-14 third quarter to pull within 72-69 entering the fourth. The 76ers got within one on multiple occasions in the final period, the last on a 3-pointer by Georges Niang with 5:01 left that made it 89-88.

Then Randle took over. He converted a driving layup and then a pair of 3-pointers, the second giving the Knicks a 97-91 lead with 2:54 left.

“Just took what the game gave me,” Randle said. “Those are the moments I want.”

“The game could’ve gotten away from us in the first half and it didn’t,” 76ers coach Doc Rivers said. “We hung in there.”