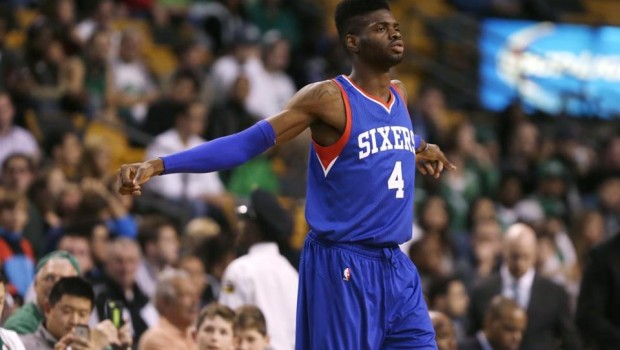 Nerlens Noel had 14 points, 9 boards and 2 blocked shots against the Knicks.

The worst record in the NBA.

That’s what the Sixers and the Knicks were playing for Sunday at Madison Square Garden.

The Sixers had a chance to end their preseason goal of finishing with the league’s worst record and winning the No. 1 lottery seed by posting a victory over the Knicks.

However, the Sixers are still alive as the Knicks won 101-91, ending a nine-game losing streak.

The Knicks, who registered 14 blocks, one off the franchise record, are still in good shape to win the top lotto seed over Philly. Ironically, just six months ago, Knicks brass voted for lottery reform that would have penalized the team with the worst record.

The Sixers are ahead of the Knicks (15-62) by 2 ½ games in the standings. The bigger threat to the Knicks is the second-worst Wolves, who are just 1 ¹/₂ games better with five games to play.

Last Oct. 22 at the Board of Governor’s meetings in Manhattan, lottery reform was proposed with a plan to give the top-five worst teams equal odds in the lottery — each getting 12 percent. The Knicks were one of 17 teams to vote for the change, according to an industry source. But it didn’t pass because 23 “yes’’ votes were needed.

In hindsight, Knicks brass is glad it didn’t go through. The old system stayed in place and the Knicks, if they maintain the worst record, will have a 25 percent chance at winning the lottery as opposed to 12 percent.

That would give them first crack at either stud big man in the draft — Kentucky’s Karl-Anthony Towns or Duke’s Jahlil Okafor.

The Knicks’ voting in favor of lottery reform is the clearest indicator there was no intention of tanking this season, and they only decided on a new course in January when the bottom fell out.

“It’s interesting because both teams got labeled as — throwing that tanking word around,’’ Derek Fisher said before the game. “When you watch both teams play, it doesn’t appear [either] coach or team is trying to lose.’’

Knicks president Phil Jackson gave a strong hint he would prefer Towns over Okafor when asked last week at a season-ticketholder function whether he preferred an offensive- or defensive-oriented big man.

On Sunday, Fisher said, “We’ll have our chance wherever we end up and select a really good player no matter what number. It’s more so what we do with that guy once we get him than who he is when he shows up.’’

The Sixers entered the season with a payroll below the minimum requirement and lost their first 18 games. They fought heavily against lottery reform and it will barely pay off for them; with the expected third seed (the Timberwolves likely will be the second), the Sixers, who have a solid coach in Brett Brown, will have a 16 percent chance of winning the lottery and could fall all the way to sixth.

Even with the Knicks’ slow start, the possibility of them sinking below the Sixers was still considered a joke. But they finally did so Jan. 5 — on the same night Jackson blew up the team in releasing starting center Samuel Dalembert and trading J.R. Smith and Iman Shumpert for cap space and a trade exception.

Jackson said Thursday it could turn into “a godsend’’ for the club to post its worst season in history, however unintentional it may have been when the season began. No longer is Jackson beating himself up over the disgraceful product he has put on the Garden floor, instead using it as a marketing tool with season-ticket subscriptions due soon.