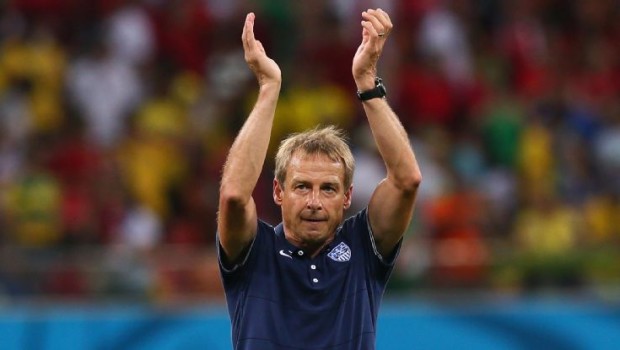 The World Cup has been set up with advantages for the pre-tournament favorites, United States coach Jurgen Klinsmann (photo above) said

The Americans were moments away from advancing to the knockout stage from Group G — often referred to the Group of Death — when Portugal pegged them back for a 2-2 draw in Manaus. The U.S. now must face Germany in the final game of the group stage with safety not assured.

The U.S. are traveling more miles at the World Cup than any other team. They are based in in Sao Paulo to the south, but their first and third games are in the northeast, and their second game in the northwest at the most remote location of the World Cup.

With its rainforest climate, Manaus has also proved to have the most difficult heat conditions, with the referee in Sunday’s match stopping play for the first-ever water break at the World Cup.

Germany will have an extra day to prepare for their final group-stage match with the U.S., having drawn 2-2 with Ghana on Saturday afternoon, while the U.S. played Sunday night.

Combined with the disappointing ending against Portugal, it was all too much for Klinsmann.

“We have one day less to recover. They played yesterday, we played today,” the German-born Klinsmann said about the team from whom he played in three World Cups and managed in 2006. “We played in the Amazon, they played in a location where they don’t have to travel much.

“Everything was done for the big favorites to go and move on. We’re going to do it the tough way.”

FIFA can not be completely blamed for singling out the United States, however. The venue schedule was set before the World Cup draw, and any team — besides the eight seeded teams such as Germany — could have hypothetically fallen into the U.S.’ slot in Group G.

The U.S. also chose their own base camp location. Germany chose to set up camp in Porto Seguro, about halfway up the Brazilian coast, cutting their air travel to about half of what the U.S. must face.

Despite their disadvantages, the U.S. are second in Group G with four points and need just a draw to ensure they move into the knockout stage.

U.S. midfielder Michael Bradley said the U.S. will be prepared for the Germans on short rest.

“Obviously, disappointed not to close it out and come away with three points but we have no choice but to keep going,” Bradley said. “It’s a short turn-around and we’ll get ourselves ready for another game on Thursday.”