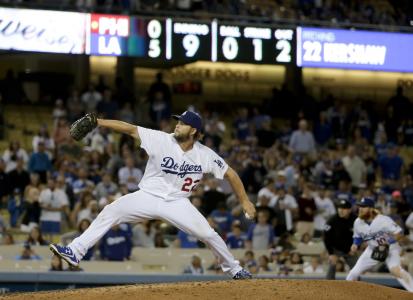 This what happens when a feckless MLB offense faces one of the game’s best pitchers:

Clayton Kershaw made his case for fans to vote him into the All-Star game by striking out a season-high 13 in an eight-hit shutout during his last outing before the break.

The left-hander snapped a five-start winless streak, and Jimmy Rollins hit a three-run homer against his former club to help the Los Angeles Dodgers beat the Phillies 5-0 Wednesday night at Dodger Stadium.

Kershaw was glad to shake hands with his teammates on the field following his 10th career shutout and 18th complete game in his 227th start.

Kershaw (6-6) walked none on 123 pitches. He has made three straight scoreless starts against the Phils.

“When a guy like Kershaw is pitching like he did, you’re in trouble,” Phillies interim manager Pete Mackanin said. “He’s got six losses, so somebody caught him at the right time. We unfortunately didn’t.”

The reigning NL MVP and three-time Cy Young Award winner is bidding for his fifth straight All-Star selection. He’s among five candidates in the fan election for the final National League roster spot for next week’s game in Cincinnati.

“I don’t really care how I get to go. I have no pride in that,” Kershaw said. “It doesn’t say `with fan vote’ when it’s all said and done. If I get to go, great. If not, maybe a little bit of disappointment, but I’ll move on and enjoy the time off.”

“He was really good at getting ahead,” Ellis said. “As the game progressed he got a real feel for his off-speed stuff, primarily his curveball.”

Adam Morgan (1-2) gave up five runs and six hits in four innings. The left-hander struck out one and walked one in his third career start.

“I felt off a little bit. The biggest mistake that I think I made was falling behind on guys and trying to pick too much,” Morgan said. “When you start picking too much, you fall behind in the count, and I don’t like to walk a lot of guys, so they got something to hit.”

Just two Phillies reached third base. The first came on a wild pitch in the sixth, when Kershaw gave up consecutive singles to Maikel Franco and Darin Ruf before retiring the last two batters on popups. Carlos Ruiz doubled leading off the ninth and moved to third on Freddy Galvis’ groundout, but Kershaw retired the final two hitters to close out his first shutout since last July 26, a three-hitter against San Francisco.

“I felt like my fastball command was better than it has been,” he said.

Kershaw worked himself out of another jam in the seventh after back-to-back singles by Galvis and Domonic Brown opened the inning. Kershaw then retired the next three batters.

Brown got burned by Kershaw’s curveball in his last at-bat, when he struck out.

“I was sitting away and he still froze me away. When he’s spotting up on the black like that, it’s tough for a hitter,” Brown said. “When you get two strikes on you, it’s going to be tough trying not to swing at anything out of the zone. At the same time, he’s still got 94, 95 (mph) in his back pocket when he wants it.”

Kershaw got early support from Ellis’ homer, his first of the season. Rollins had doubled leading off the second.

Ellis was 3 for 4 with a strikeout.

Rollins followed in the third with his three-run shot, extending the Dodgers’ lead to 5-0. His two-run single helped the Dodgers to a 10-7 win in the series opener Monday.