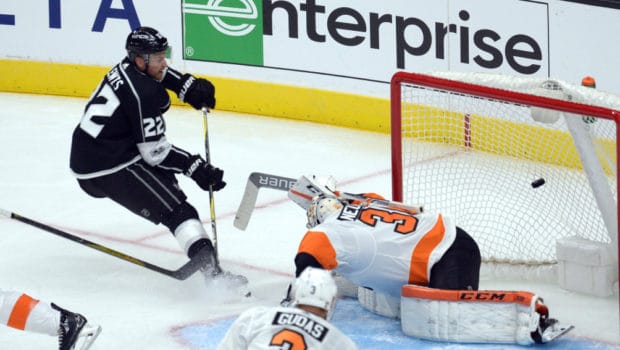 Jonathan Quick made 35 saves in the first season-opening shutout of his career, and the L. A. Kings won in new head coach John Stevens’ debut, 2-0 over the Flyers.

Trevor Lewis and Tyler Toffoli scored for the Kings, who immediately got a stellar game from their well-rested goalie. Quick was outstanding in the third period, making 17 saves and surviving a series of short-handed situations to post the seventh October shutout of his career.

Quick didn’t return until late February after getting hurt in last season’s opener. The Kings missed the playoffs for the second time in three years, leading to coach Darryl Sutter’s firing and the promotion of Stevens, Sutter’s longtime assistant and the former Flyers’ head coach.

Michal Neuvirth stopped 25 shots for the Flyers, who followed up its season-opening win at San Jose with a frustrating offensive night.

“Every line was doing the right thing out there,” captain Claude Giroux said. “Tonight we just ran into a hot goalie. He’s not too bad.”

After a scoreless first period highlighted by Neuvirth’s glove save on Kings captain Anze Kopitar, Lewis put Los Angeles ahead midway through the second on a setup from Nick Shore. Toffoli scored with 2:21 to play on a pass from former Flyers forward Jeff Carter.

“It’s a back-to-back, and that’s tough to have in the second day of the season,” Flyers coach Dave Hakstol said. “We still generated quite a bit, but we couldn’t find a way to put one in the back of the net.”

Stevens took over the Kings this summer after serving as an assistant for the previous seven seasons, winning two Stanley Cup rings as Sutter’s defensive specialist. Before heading to LA, Stevens coached the Flyers for parts of four seasons from 2006-10, leading them to the Eastern Conference finals in 2008.

Alex Iafallo, a speedy 23-year-old forward from Minnesota-Duluth, skated on Los Angeles’ top line with Kopitar and Dustin Brown in his first professional hockey game after winning a roster spot in camp. Defensemen Oscar Fantenberg and Kurtis MacDermid also got their first shot with the Kings, who want to be faster and younger in the post-Sutter era.