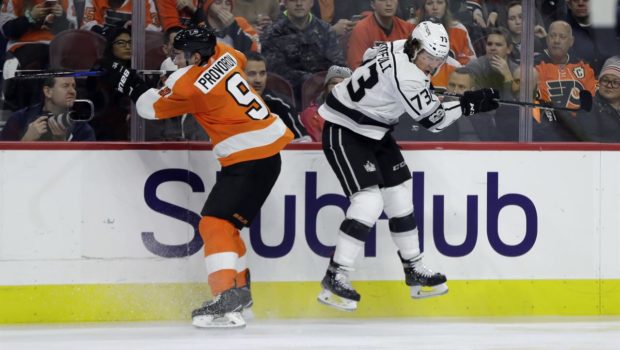 Adrian Kempe scored in the third period, Jonathan Quick made 36 saves and the Kings ended the Flyers’ six-game winning streak with a 4-1 victory.

Alec Martinez, Trevor Lewis and Tyler Toffoli also scored for the Kings, who had won eight straight before starting their four-game trip 0-2-1.

“I think we’ve played really good hockey over the past 10 days, two weeks,” Voracek said. “We’ve just got to make sure we don’t get stuck on losing. We have to find a way to win on Wednesday and hopefully start another streak.”

With the Kings leading 2-1, Kempe finished serving a cross-checking penalty and scored his 11th goal on an odd-man rush at 4:48.

“It was a good opportunity,” he said.

Toffoli scored his 16th with 4:29 left to put it away, with Nick Shoregetting his second assist.

The Flyers had more chances — they held a 37-25 edge in shots — but couldn’t convert against Quick in another twist to their topsy-turvy season.

“He was good tonight. He made a few big saves,” Flyers center Sean Couturier said of Quick, who shut out the Flyers on Oct. 5. “It was tough finding those rebounds.”

Elliott, the NHL’s No. 2 star of the week after posting a 1.31 goals-against average in three victories, wasn’t as sharp in his eighth straight start.

The Kings scored twice on their first seven shots. Martinez got his third directly off Torrey Mitchell’s faceoff win over Scott Laughton, and Lewis beat Elliott short side to make it 2-0.

Voracek, who entered with an NHL-high 33 assists, picked up his eighth goal with 1:56 left in the first period after collecting Claude Giroux’s deflected shot.

It was the sixth straight game in which the Kings, who have the NHL’s top penalty kill, allowed a power-play goal.