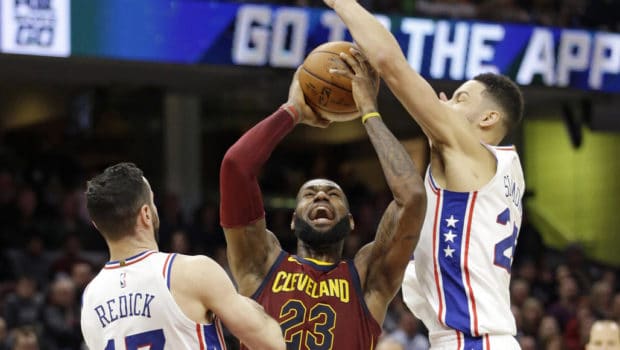 The Sixers proved they could hang with the best in the NBA last night, even without star center Joel Embiid.

LeBron James had his 58th career triple-double and the Cleveland Cavaliers rallied in the fourth quarter to beat the visiting Sixers 105-98.

Sixers forward Robert Covington fell into Cleveland’s bench trying to save a loose ball with just over a minute to play. He was down for a couple of minutes before being helped to his feet and to the locker room.

Rookie Ben Simmons’ breakaway dunk gave the Sixers a 96-91 lead, but the Cavaliers ended the game on a 14-2 run. James converted a three-point play and Kyle Korver hit a 3-pointer, giving Cleveland the lead.

James had nine points, seven rebounds and six assists in the fourth quarter in his third triple-double of the season.

Covington and J.J. Redick scored 19 points each for Philadelphia.

Both starting centers missed the game. Embiid sat out because he hasn’t been cleared to play on back-to-back nights and Kevin Love didn’t play because of a sore left hip.

Cleveland led throughout the third quarter but Redick scored eight straight points early in the fourth, for an 86-81 lead.

Cleveland cut the lead to one, but the Sixers regained its five-point advantage before the Cavaliers took over.

Wade, Korver and Crowder each scored 13 points for Cleveland. Simmons had 14 points, 6 rebounds and 10 assists for the Sixers.

Sixers forward Dario Saric, who scored 17 points, wore goggles because a left eye laceration and a corneal abrasion of his right eye.