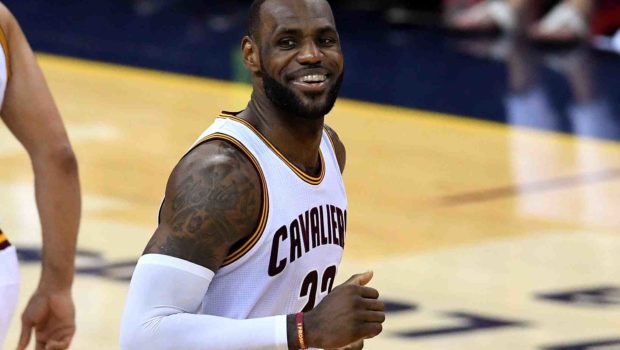 LeBron James and the Cleveland Cavaliers are smiling this morning after!

Oracle Arena was clad in black, and here was LeBron asserting his will on the Golden State Warriors in Game 6, 41 more points, 11 more assists, eight more rebounds and another night of saying not now, maybe not ever.

Cleveland 115, Golden State 101, the Warriors left in a stewing puddle of anger. Steph got fouled out, T’d up and ejected from the joint. In the process, he heaved his mouthpiece and hit a fan(by accident, he said). “I had a reaction to it,” Curry said of the officiating. “It got the best of me.” Meanwhile, his wife was busy tweeting the game was rigged.

That was no conspiracy here on Thursday, Mrs. Curry. That was the King.

LeBron took it all in with distance and disdain, having controlled the night from the first point to the postgame Craig Sager interview in ways that simply can’t be quantified. “MVP! MVP!” Cleveland chanted at LeBron, and conversely at Steph. LeBron offered no hint he heard it, just emotionlessly walking off the court with his mind on the business at hand. He is the picture of calm.

It’s the Californians who are supposed to be cool, the Clevelanders who crumble in the crucible. Script flipped.

On Sunday in Oakland, it all goes down, 3-3 in the series now, Cleveland the first team since 1966 to trail 3-1 in the NBA Finals and force a Game 7. The Cavs will try to become the first ever to win it.

James went 41-16-7 in Game 5 to give Cleveland this, a night the Cavs were never sure they’d even get. Then he delivered a performance they’ll never forget.

“LeBron being LeBron,” coach Tyronn Lue said, which may be true but isn’t really even fair to LeBron because it makes the accomplishment seem reasonable and reachable and routine.

It is none of those things, not in elimination games against the defending NBA champs and their record 73 victories. Not when his impact is felt on virtually every possession on both ends of the court. Consecutive 41-point games don’t even begin to explain it. James played 42:35 of the first 44:54 of the game, somehow powering through tiring legs to make play after play, refusing to rest.

“With our season on the line, at the end of the third quarter, he said, ‘I’m not coming out,’ ” Lue said.

“I just didn’t want to come out,” James said.

At one point in the second half he scored 18 consecutive Cleveland points, a run that eventually stretched to 27 that he either scored or assisted on. There was LeBron draining threes like a shooter. There was LeBron controlling the boards like a big man. There was LeBron bringing the ball up and setting the attack like a point guard.

“Just out there playing,” James said. “Been fortunate to see the ball go through the hoop.”

There was LeBron, his block as potent as his bark, swatting Steph violently on a fast break and then smack talking right up at him. There was LeBron going right at the star of the Warriors and demanding he meet his intensity, meet the moment or suffer in the spotlight. On Thursday, Curry couldn’t counter so he did stumble, suckered into bad shots, drawn into bad fouls, reacting to bad calls. He was useless in the end, sitting in the locker room listening to Cleveland rock outside.

“However he wants to celebrate or whatever he wants to do to kind of take in that moment, it is what it is,” Curry said of he and James exchanging words and emotions. “I stay aggressive. Don’t let that try to get in my head.”

Only Curry knows for sure if James is getting the best of him mentally, if trying to match the fury LeBron has brought to these closeout games has knocked him off balance. Curry had 30 on Thursday, but it took 20 shots to get there, and he was minus-11 while on the floor. No one expects Steph to admit LeBron has rattled him. No one would blame it for happening.