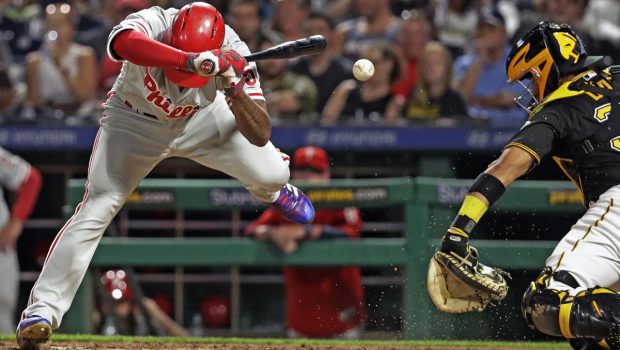 Andrew Knapp and Odubel Herrera hit three-run homers, rookie Scott Kingery had a career-high four hits, and the Phillies smoked the Pirates 17-5 to move into a tie with the Braves for first place in the NL East.

Herrera’s shot into the right-field stands in the third inning pushed the Phillies’ lead to 5-1.

Knapp’s blast to left capped a seven-run seventh, making it 14-4.

Herrera finished with four RBI and Carlos Santana drove in three runs. Cesar Hernandez and Rhys Hoskins had three of the Phillies’ 18 hits and Maikel Franco hit a two-run double in the second.

“We played Phillies-type of offense,” first-year manager Gabe Kapler said. “We continue to see a lot of pitches, work a lot of counts, grind down the opposing pitchers. I really believe it’s a great way to win baseball games and our guys are starting to understand it and going along with it more and more.”

Edubray Ramos (3-0) retired both batters he faced in the fifth inning after being activated from the disabled list before the game.

Both starting pitchers were chased in the third inning. Nick Pivetta was charged with three runs — one earned — and Williams was tagged for five runs.

“I kind of set the tone for the record,” Pivetta said, “but our guys did a good job of battling and overcoming it.”

Pivetta has made eight starts in a row without a victory, though he got the win in relief Sunday against Washington. Williams has lost his last three starts, allowing 12 runs in 13 innings.

“I’m tired of getting my ass kicked,” Williams said.

The Phillies sent 11 batters to the plate in the seventh to take a 10-run lead. Hoskins and Herrera hit consecutive RBI singles and Santana doubled home two runs before Knapp connected against Josh Smoker.

Jesmuel Valentin belted a two-run double and scored on a double by Hoskins in the ninth.

Pittsburgh’s Colin Moran opened the scoring with an RBI single in the first.