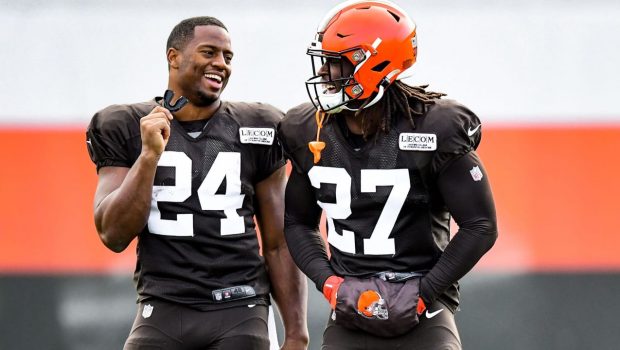 Even the often out to lunch Jim Schwartz knows that his defense has to contain the Browns Nick Chubb and Kareem Hunt to have any chance to beat the Browns today.

“How well we stop the run is going to go a long way to how well we play in this game. They are an outstanding run team. Probably the best two running backs we face this year. Not just the best two on the team, but the best two overall. Great balance. Great power. They know what they want to do in the run game. Nothing sort of takes them out of it. There’s not a whole lot you can do scheme-wise that forces them to do something else. They are going to run it. It doesn’t matter what your look is and they are going to take that attitude of if you have an unblocked guy, the running back is going to try to run over them.

“It’s going to take everybody. It’s not just the defensive linemen. It’s not just the linebackers. Our corners are going to have to have an outstanding game defending the run. There’s some carryover to like San Francisco. There are some similarities in what the run game is. We have to do a good job on stopping that zone stretch and their power run games. They are a good contact-running team, and like I said … Hunt and Chubb are both outstanding running backs and it’s going to be our biggest challenge of the year and we need to be up to that challenge.”