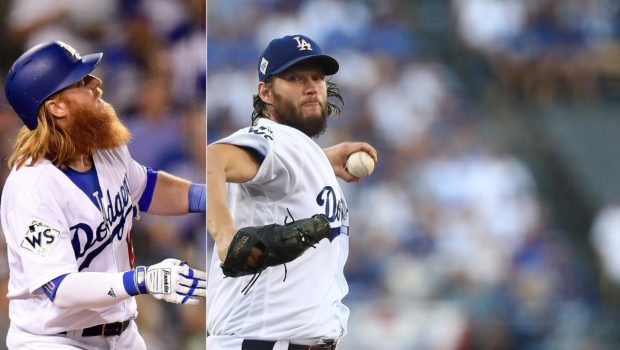 The great Sandy Koufax was in the stands last night, and so was Don Newcombe.

But the balls-out star of the first game of the World Series at Dodger Stadium was 29-year-old Clayton Kershaw!

Kershaw shut down the explosive Houston Astros with 11 strikeouts in seven innings, and Justin Turner slugged a tiebreaking two-run homer off Dallas Keuchel for a 3-1 Dodgers win.

Turner’s sixth-inning home run followed a two-out walk to Chris Taylor, who opened the bottom of the first by launching Keuchel’s first pitch 447 feet for his third postseason homer.

“I think CT is the hero,” Turner said of his co-MVP of the National League Championship Series. “He got us on the board early. He drew the two-out walk, stayed in the zone and gave me the opportunity. That’s what he’s been doing for us all year long. He’s the spark plug at the top of the lineup, and when he goes, we go.”

Before the game, someone had scrawled a plan on the whiteboard in Los Angeles’ clubhouse. “Hit these boys in their mouths & don’t look back!” the message read. The Dodgers did just that.

“Taylor hit a first-pitch four-seamer out of the yard, kind of hit us in the jaw,” Keuchel said.

“We recovered nicely. I knew we would scratch a run, maybe two, off of Kershaw, but he was as good as advertised. It was one pitch away from being 1-1 going into the seventh. We’re trying to win one of two here, so hopefully we’ll come out tomorrow and get a win.”

Los Angeles’ first World Series appearance in 29 years began with a record 103 degrees at first pitch, but the heat didn’t bother Kershaw, who in his World Series debut allowed only three hits and a run on Alex Bregman’s home run leading off the fourth.

“Tonight was one of those nights I think the first time in a while, where we’ve seen all three of his pitches synced up,” said Roberts. “He just was repeating the delivery, held the velocity. Was throwing the baseball where he needed to, where he wanted to.”

Kershaw, in a franchise-record-setting seventh postseason victory, didn’t walk a batter, and the 11 strikeouts were tied for the most by a Dodger in a World Series game since Koufax’s 15 in Game 1 in 1963 against the Yankees.

They also were the most for any pitcher in the World Series since the Yanks’ Orlando Hernandez had 12 in 2000, and the most strikeouts by any one pitcher against the Astros this year. The only other pitcher with 11 strikeouts and no walks in a World Series game was current Dodgers executive Newcombe (1949), who also was in attendance last night.