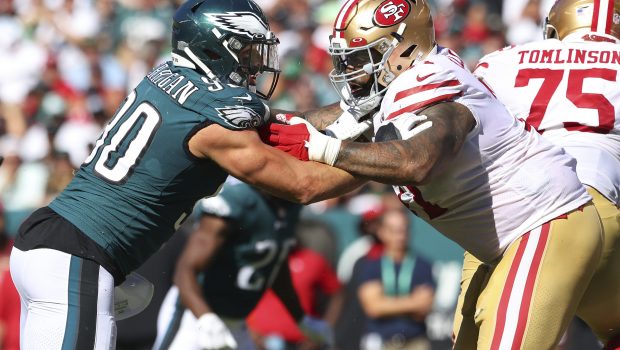 KERRIGAN’S BEEN A BUST — DC GANNON GASLIGHTS HIM INTO A STAR!

So, the Eagles signed edge rusher Ryan Kerrigan in the offseason, and the lame-ass local media went nuts:

He had 95 1/2 sacks in his 10-year career in Washington, and he was especially tough on the Birds, so this was a great signing.

But the 33-year-old Kerrigan injured his thumb in camp, and as it has turned out has very little tread left.

He has played in all six Eagles games and made one tackle with no sacks or a QB hurry.

“On the stat sheet, you mean? he asked rhetorically. “Because in my opinion, [Kerrigan] has been productive.”

“How would I quantify that is he lines up, he gets aligned the correct way, he plays with his eyes the right way, he’s asked to do the techniques that we’re asking him to do and he’s playing winning football within his role,” Gannon said.

“What I mean by that is, like somebody that makes a tackle on a run, well, Ryan helped that guy make that tackle by how he crushed the block,” said Gannon. “I don’t always look at – with [DT] Fletcher [Cox] moving back a couple weeks like, he’s balling.”

“Now, the stat sheet might not jump out at you and be like, ‘Well, this guy doesn’t have 10 sacks or six, whatever TFLs,’ this and that, but within the framework of what we’re asking those guys to do, they’re being productive.”

“Now, with saying that, we can – you know, with a DB. He didn’t have any interceptions, he didn’t get any PBUs, yeah, but when the ball came to him six times, he gave up two completions,” was the example Gannon gave. “That’s a winning day for me, with no PBUs and no interceptions. He’s not allowing his guy to catch the ball.”

“Production is a way to measure; you know what I mean?” the DC said. “So, you always have to, as a coach – what’s the blend of is this guy playing winning football for us? And who is producing when the plays that are there for him to make, does he make them? I think [Kerrigan] is doing that.”