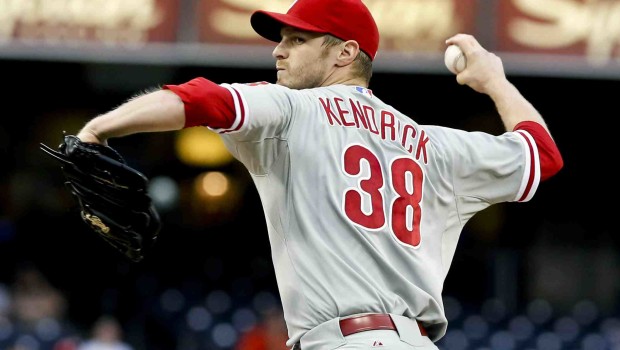 KYLE KENDRICK’S LONG NL NIGHTMARE IS COMING TO AN END

Kyle Kendrick’s long National League nightmare will soon be over.

He struggled with his command in five innings in Thursday’s 7-3 loss to the Padres at Petco Park.

He fell to 9-13 with a 4.73 ERA, which is the eighth-highest ERA out of 91 qualifying pitchers in baseball, while the Phillies fell to 70-83 as the offense continued to struggle.

“Coming up with the clutch hit or a two-out hit with men on base, the Padres got some of those and they minimized us in those situations,” Phillies manager Ryne Sandberg said about the Padres winning three of four in the series.

The Phillies have hit .205 and averaged just 2.9 runs per game in their past 12 games. They pieced together just five hits and one run in six innings against Padres left-hander Robbie Erlin, who improved to 4-4 with a 4.53 ERA.

“They hit a couple of balls on the nose,” Padres manager Bud Black said. “We played a solid game defensively.”

The Phillies will have to find offense somewhere in the offseason.

Kendrick will have to figure out his future, too. He is a free agent after the season. He wiggled out of a jam in the first inning before he allowed a home run to Alexi Amarista in the second to hand the Padres a 1-0 lead.

Kendrick has allowed 25 home runs this season, which is tied for fifth-highest in the Majors.

The Phillies tied the game in the fourth. Darin Ruf hit a one-out double to left field and advanced to third on a wild pitch. Domonic Brown singled to left field to make it 1-1.

But Kendrick could not hold the score. He quickly loaded the bases in the fourth before Amarista’s sacrifice fly made it 2-1. It could have been worse, but Brown threw out Seth Smith at third for the second out.

Kendrick retired the first two batters he faced in the fifth then allowed a single to Jedd Gyorko and walked Yasmani Grandal. Smith singled to right field to score Gyorko and make it 3-1. Antonio Bastardo allowed a run in the sixth, and Cesar Jimenez allowed three on Will Venable’s home run in the eighth.

Kendrick allowed six hits, three runs, five walks, a home run and struck out two in five innings. It was the seventh time in his career and second time this season that he walked at least five batters in a start.