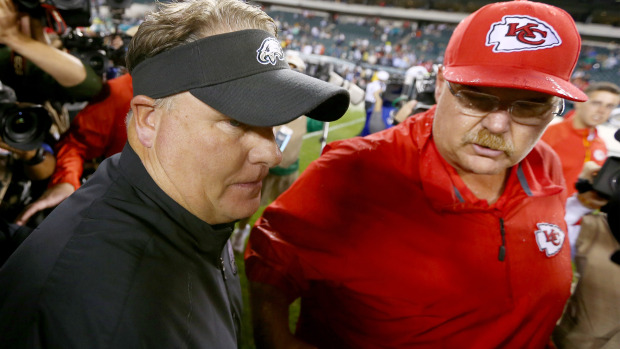 Reid was a QB coach — for Brett Favre, for God’s sake!!!!!! — in Green Bay when Lurie hired him to be Eagles head coach. He hadn’t even been a coordinator, let alone had a hand in the draft. Kelly is an innovator and ran up a 46-7 record in four years at Oregon, scouting and recruiting the best players in the nation, many of whom will go in the first round of the April 30 draft.

I bow to no one in my admiration of Mark Eckel of NJ.com, who is probably the best writer/reporter in the area covering the Eagles.

But even Eckel wrote a piece that fell with a thud yesterday — it compared Eagles coach Chip Kelly with his predecessor Andy Reid, and it basically said Jeff Lurie is producing a movie with Kelly that we had seen with Reid.

With Chip Kelly starring as Andy Reid, time to find out if Eagles remake is better than the original

Just re-cast Chip Kelly in Reid’s role; Tom Gamble as Tom Modrak; Ed Marynowitz as Tom Heckert; and Howie Roseman as a young Joe Banner. Lurie is the only one from the original and will play himself.

In the 2002 version, Reid, with a BYU head coaching vacancy as a bargaining tool, went to the front office and assumed total control of the football operations. They even gave him a fancy new title.

Modrak and his right-hand man Mike McCartney were fired to make room for Reid. McCartney’s role has been written out of the re-make, unless someone else besides Gamble got the axe and we haven’t been told yet.

Reid then hand-picked his personnel man, Heckert, who assumed the title of general manager but worked for Reid, who had final say on draft picks, free agency, the roster and what kind of food was served in the cafeteria.

The re-make has more of a gangster feel to it.

Roseman, the general manager at the time, got Gamble whacked. Why? Well, that’s one of the holes in the plot that’s never been answered. The assumption is he just didn’t like him. And the feeling was pretty much mutual.

Two days later, Kelly, upset over his friend’s demise, got Roseman. Except in this case the GM doesn’t get fired, he gets a new title and a nice raise. He’s just told he can’t make any more draft picks, make any trades or sign any free agents. He’ll still handle the money. And, oh yeah, he has to make sure the footballs are inflated properly every week and the midnight green uniforms are ready for the start of the season.

After a month-long search, Kelly promotes Marynowitz from within as his top personnel man.

Will this new system work?

It did in the original, at least at first.

Reid had final say and everyone knew it. Heckert and the scouting department gathered the information on college players, pro free agents, etc, and presented it to the boss who made the call.

Banner, although he would meddle occasionally in the personnel side (and that was never a good thing), made it all work financially.

While the ultimate goal was never accomplished, the team did go to five NFC Championship Games and a Super Bowl.

How does re-make turn out?

Well, if everyone plays their role, and there’s no overacting, or overstepping their boundaries, it could work just as well.

That means Marynowitz and his scouts, provide the right list for Kelly, who the makes the right call, and Roseman gets it all done under the salary cap.

And then maybe just maybe, the ending will be a happy one.

Due respect to Eckel, but Chip Kelly has about as much in common with Andy Reid as Jeff Lurie does with Batman.

Reid was a QB coach — for Brett Favre, for God’s sake!!!!!! — in Green Bay when Lurie hired him to be Eagles head coach. He hadn’t even been a coordinator, let alone had a hand in the draft.

Kelly is an innovator and ran up a 46-7 record in four years at Oregon, scouting and recruiting the best players in the nation, many of whom will go in the first round of the April 30 draft.

If Kelly doesn’t win a Super Bowl here it won’t because he hasn’t drafted well or had the power. It will be because Lurie has given in to the Andy Reid comparisons, which are bogus.