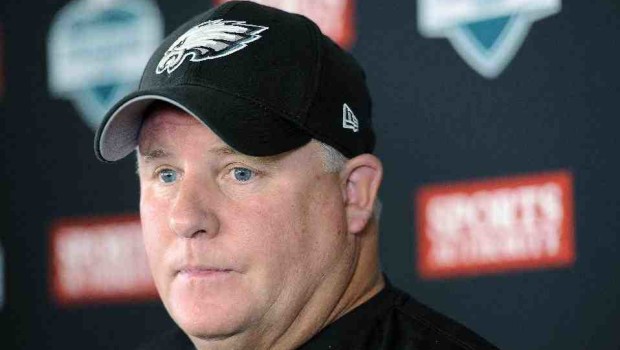 KELLY ON NFL HYPE, FANS WHO WATCH THE COMBINE ON TV

Chip Kelly isn’t buying into the NFL Hype Machine and he doesn’t care who knows it.

The Eagles’ second-year head coach addressed those comments Monday prior to the team’s open practice at Lincoln Financial Field:

“[Peter King] just asked me what I was surprised about the most after my first year in the NFL and I told him the hype in general around the NFL Draft,” Kelly explained. “It’s obviously instrumental in terms of putting together your team, but every day from when the Super Bowl ends to the draft which was at the end of May or the beginning of June or it may be pushed into July at some point in time, it’s all anyone talks about.

“The fact that people would watch the combine, there’s times at the combine where I actually fall asleep.

“I felt the same way in college, you devote everything to signing day, but how many of those guys on the signing day are actually going to contribute? I think you may have one or two of your rookies that have an impact on your team, but the rest of them it’s a part of having them develop.

“I don’t know why you’d watch it on television. I mean, they’re running 40-yard dashes. I just think the hype was the point I was talking about.

“I don’t care who it is. You guys are in the newspaper business, if there’s a rookie reporter I don’t think you all start applauding and say ‘the savior is here, our paper is saved’ because we just signed a kid out of Northwestern because he has such good prose, it doesn’t seem to be that big of a thing but in football it’s the biggest thing in the world and if a guy wasn’t an all-pro in his rookie year and he was a first-round pick then he’s a bust, but I don’t necessarily think like that.”