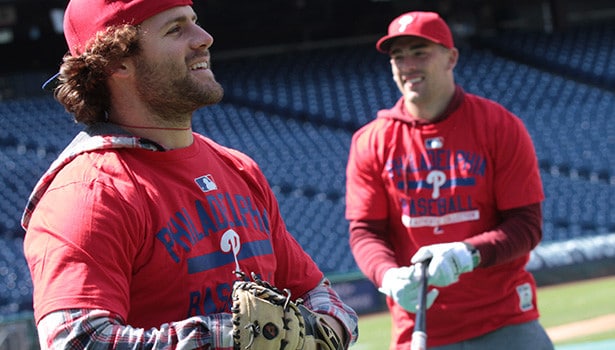 Even though the Eagles look more than ready to start the 2015 season:

The Chicken Littles in Eagles Nation are still worried about Kiko Alonso (above left as a Phillie).

Alonso suffered a concussion during a practice session on Aug. 6 and continues to inch closer to suiting up for game action.

Eagles head coach Chip Kelly announced on Monday that “Alonso will practice this week.” Alonso added his surgically repaired knee was “nagging,” , adding he was “just being cautious.”

Kelly also revealed that “no playing time has been determined for Thursday” after Alonso failed to play in the team’s third preseason game on Aug. 29. Alonso announced on Aug. 24 that it was his goal to play in that game.

On Aug. 18, Geoff Mosher of CSN reported Alonso hadn’t completed the league’s concussion protocols but had cleared enough steps of the procedure to be allowed to take part in non-contact drills.

A significant injury to Alonso would be a huge blow to the Eagles, who acquired the 25-year-old from the Buffalo Bills during the offseason in exchange for LeSean McCoy. He missed the entire 2014 season due to a torn ACL.

The Eagles need the versatile and athletic Alonso in the middle of their defense. As a rookie in 2013, he proved that he’s capable of doing great things, recording four interceptions and two sacks.

Kelly has spent a lot of time remaking the roster with the players he wants. Alonso was one of the first major pieces Kelly brought in, and though he’s under a lot of pressure, a concussion isn’t the kind of injury that can be cured in a set time frame.