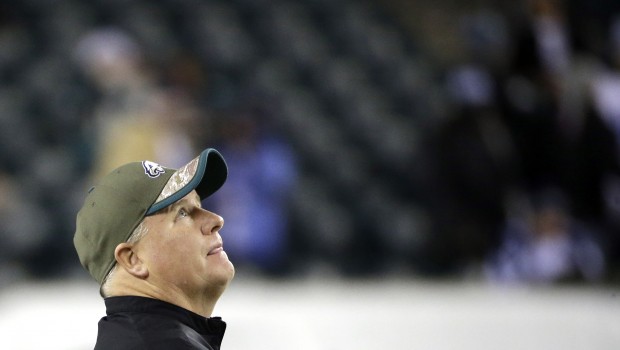 Eagles Supreme Leader Chip Kelly is nothing if not a pragmatist.

When faced last week with the Mt. Everest-like mountain he and the Birds would have had to climb to steal Marcus Mariota in the NFL draft he did the judicious thing and said no.

Kelly tried to trade up to draft quarterback Mariota, and he doubts he’ll ever get to draft a top quarterback.

Kelly said he’d love to be able to draft a quarterback first and second overall, but he thinks if the Eagles ever have the first or second pick, he’ll get fired. So Kelly hopes that Sam Bradford, who was once a first overall pick, can prove to be the Eagles’ franchise quarterback.

“When you look at all the winning organizations,” Kelly said, via CSNPhilly.com, “if you want to play with the odds as we want to play, it’s got to be with a quarterback situation and then the only way you’re going to get a quarterback is you got to be really not very good so you finish in the top 1-2 in the draft. If we’re not very good and we finish with the top 1-2 in the draft, I don’t think I’m going to be here, so we better find another way to find a quarterback. And that’s what we did with Sam.”

But Kelly is surely right that if the Eagles collapse and get the first or second pick in the draft, someone else will be making that pick.