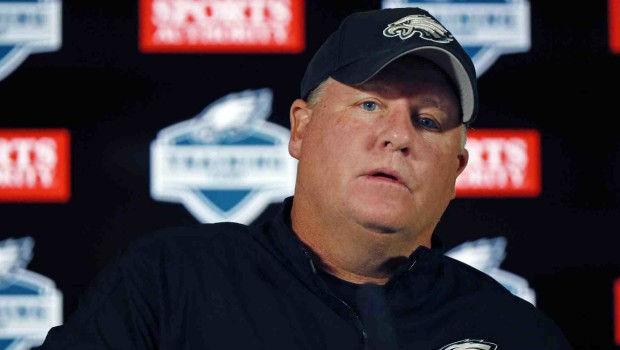 'KELLY DOESN'T GIVE A S— WHAT OTHER PEOPLE THINK'

Thanks to ESPN.com Insider Mike Sando, we have a survey of the 32 NFL coaches as seen by a host of unnamed NFL GMs and coaches who rated Birds’ former boss Andy Reid eight places higher than current coach Chip Kelly, with Patriots’ Bill Belichick No. 1 and Seahawks’ Pete Carroll No. 2:

Reid is the only coach among the top seven without a Super Bowl title, a testament to his consistency over an extended period. “When you talk about Andy Reid being to five NFC title games or Belichick with three Super Bowls, that is what I see as a 1 — a Hall of Fame-type coach,” a former GM said. “It’s the amount of wins, staying in the same spot and then going to a new place and going to the playoffs from the get-go with a journeyman quarterback. He just has a [presence] about him, the chemistry of winning.”

A defensive coordinator put it this way: “To me, a 1 is a guy who consistently wins regardless of what he has, and when you look at what Andy did in Philadelphia, I know he did not win a Super Bowl, but consistently winning the division for so many years, that is hard to do. It is the same with Belichick, but Donovan McNabb ain’t Tom Brady.”

Reid also has a proven offensive system. However, one personnel evaluator said there were additional challenges associated with stocking a roster for Reid. “I have watched how that system operates and there is not a lot of flexibility,” the evaluator said. “It makes it hard when you do not have exactly what the system needs from a personnel standpoint. It is easy to miscommunicate and misidentify talent or not adjust to the talent you have in the short term. It is hard to sustain and compete in the postseason.”

There were a couple of schools of thought on Kelly. Some were sufficiently excited about him to anoint him as a 1 after a single successful season in the NFL. Others of a similar mind thought he was a 2 trending toward the top tier. Nine voters placed Kelly in that third category, taking a wait-and-see approach. One noted that the Eagles struggled for a stretch last season before taking advantage of an unusually weak NFC East.

“Kelly is the fascinating guy to me, because with a lot of these young [coaches] I’m not sure, but Chip has a chance to be really special,” a former GM said while putting Kelly in the second tier with the arrow pointing up. “He is going to do it differently. Even the DeSean Jackson thing, he was not afraid to get rid of him. He thinks his system can overcome everything and sometimes those guys know. He interests me greatly.”

A defensive coordinator lauded Kelly for doing an outstanding job with players. The coordinator also suggested time would tell whether Kelly’s offense would have staying power. “I think he is a 1,” a GM said. “I just think he doesn’t give a s— what other people think, and he has his beliefs, he is outside the box and he is true to himself.”