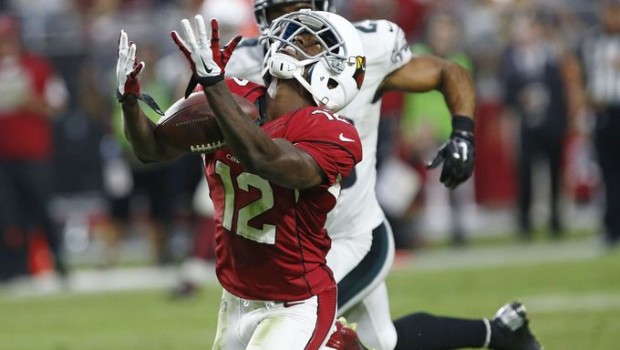 KELLY DEFENDS NATE ALLEN — WHO DOES HE THINK HE'S KIDDING?

Maybe he was crossing his fingers when he said it.

You know, like when you were a little kid and you told your parents something that you knew wasn’t true or you knew you had no intention of doing.

That was Eagles coach Chip Kelly who did the coachly thing yesterday and stood up for safety Nate Allen.

“I think Nate has played well this year,” Kelly said on Monday. “We are really happy with Nate.”

That sentiment likely isn’t shared by too many people in Philly today, as Allen (photo above) was a few steps behind Cardinals receiver John Brown on the 75-yard score in the fourth quarter that cost the Eagles a win.

On the play, Allen bit hard on a fake to the inside by Brown, before watching the speedy-receiver head up field and into the end zone.

“He bit the cheese. He admits it,” Kelly said. “It’s one thing. I don’t think he can be defined by one play…It’s unfortunate that in those situations, you are going to get exposed. If it’s a D-lineman that bites on the wrong move and doesn’t fill a gap, he isn’t going to be exposed at that level.”

Whether or not it has been just one play for Allen this season can be debated. Of the 83 safeties Pro Football Focus has ranked, Allen comes in at 55th, and 71st in pass coverage.

That is just one assessment, and it is clearly one that Kelly does not agree with.

“I think they he has done a good job,” Kelly said. “I think Nate got beat once. He made two outstanding plays. You look at the fumble and the recovery. Did a hell of a job there.”

In addition to defending Allen, Kelly also stood up for his entire defensive unit. The Eagles defense allowed 400 yards to the Cardinals on Sunday but, as Kelly pointed out, did keep them under control for most of the game.

“There were two ‘x-plays’ in the game — one 75-yarder and one 80-yarder,” Kelly said. “Besides that I thought our defense played well against a really good offense.”