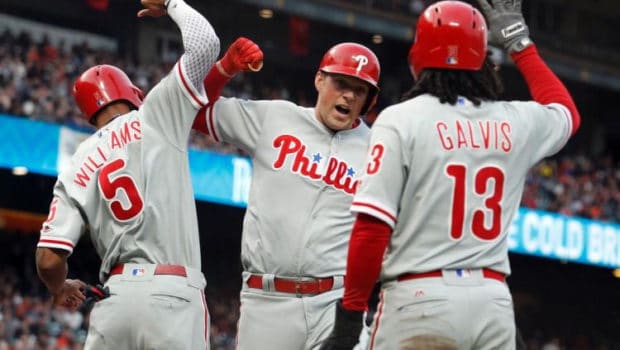 “I take anything positive, but that was pretty amazing,” Kelly said.

Down 12-4, the Giants scored five times in the ninth inning and brought the tying run to the plate before Hector Neris struck out Carlos Moncrief for his 14th save.

Adam Morgan (1-1) threw just one pitch and got the win.

Kelly batted for Morgan and hit a slam off Cory Gearrin that capped a seven-run burst in the sixth inning for an 11-4 lead. He has 14 RBI on 14 hits this year.

Cameron Rupp homered and doubled, and Freddy Galvis had three hits for the Phillies.

Rupp doubled off Blach with one out to start the sixth, with Span losing the high flyball to center field. The ball landed in front of him.

“He lost it. He never saw it in the twilight,” Giants manager Bruce Bochy said. “The ball is tough to pick up at that time of the night.”

Giants star Buster Posey was 1 for 4, extending his hitting streak against the Phillies to 21 games going back to 2014.