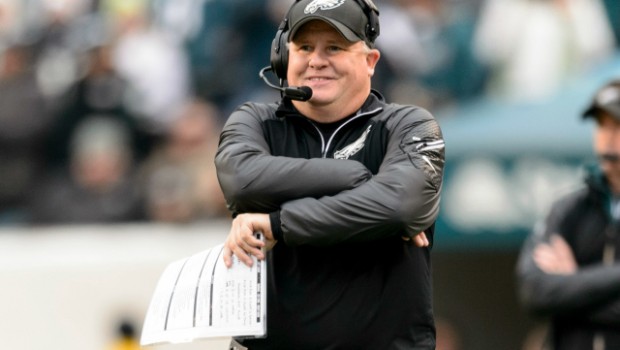 KELLY IS NOW IN CHARGE OF EAGLES — BTW, HE ALWAYS HAS BEEN

Did Chip Kelly threaten to quit in the wake of his friend Tom Gamble’s firing, as some reports said?

Did he demand a trade, as other speculated? Right now nobody knows for sure.

Friday night’s announcement from the team that Kelly is now head coach/general manager and that Roseman is vice president of football operations, was a shrewd move by Lurie. The best move he could have made.

And one that puts a lot of pressure on Kelly to produce a winner on the field in the very near future.

For one, we now now who is in charge. But in fact he always has been. Only fools in the media were asking that question.

Kelly also gets to hire his own personnel man to work directly for him. Who will it be? It would be hilarious if he brings back Gamble.

NJ.com’s Mark Eckel, one of the best-wired reporters on the Eagles beat has some suggestions:

If Kelly is smart he calls the Giants and asks permission to talk with Marc Ross, a one-time Eagles director of college scouting and one of, if not the best college talent evaluator in the business. Another good option would be to inquire about Seattle scout Todd Brunner, another former Eagles employee and New Jersey native and resident, who is also a bright, young talent evaluator.

Whatever the decision it will be Kelly’s, just like every other decision the team makes going forward.

Roseman will work the salary cap — a very important job in the NFL — he’ll do the contracts. But he will have nothing to do with football, which is as it should be.