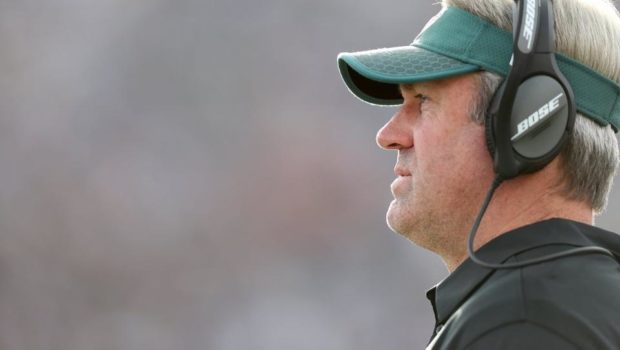 “I’m going to continue to stay aggressive,” Eagles coach Doug Pederson said as he confirmed the worst-case news that star quarterback Carson Wentz is done for the season with a torn ACL. I’m going to lead this football team. It falls more on my shoulders than it does the players.”

Pederson is trying to rally the troops and serve as the right example in dealing with crisis. That’s his job. And he needs to better at it now than he’s been all season. Stay upbeat. Don’t let ‘em see you sweat.

Maybe Nick Foles will get it done. He’s had some big moments mixed in with his struggles over the years, like the time in 2013 when he seized the job from an injured Michael Vick and threw seven TD passes against the Raiders. He’s supported by a hungry, talented defense that feeds off one of the best interior forces in the game in Fletcher Cox. There’s balance and a committee that runs the football. There’s swagger with this team – and consistency.

And there was a lot of talk from the Eagles (11-2) at the L.A. Coliseum on Sunday after they put the screws to the Los Angeles Rams, about collectively picking up the slack. That will give them a chance, especially if they can lock down the No. 1 seed for the NFC playoffs.

But no matter how aggressive, meticulous and creative Pederson can get in crafting his plan with a quarterback who grew up in his type of system, there’s one thing that he just can’t account for: the Wentz mojo.

Wentz, who leads the NFL with his franchise-record 33 TD passes, pretty much personified the aggressiveness that Pederson speaks of. You, too, can press the issue when the plan is carried out by a magician like Wentz, who so often turns busted plays and difficult moments into big plays.

“Nick’s been a starter in this league,” Fletcher Cox said. “We have faith.”

On Sunday, Foles came through with a third-down completion to Nelson Agholor to move the chains and milk the clock. Now do it again. And again.

“The guys you work with every day, you think the world of,” Foles said of Wentz. “I think he’s the MVP. You know it’s not easy, but I know this team will step up and rally no matter what. So we’ll see what will happen from here.”

“People thought our chances had gone by the wayside when Jason Peters went down, too,” Pederson said. “When Darren Sproles goes down. To the fans out there, you can’t lose faith.”