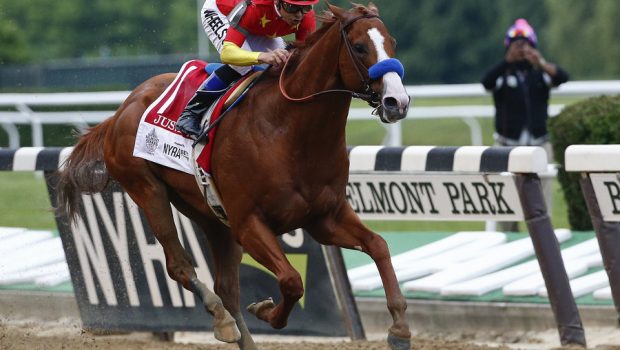 Justify won the 150th Belmont Stakes by 1¾ lengths, leading all the way to give the sport its 13th Triple Crown champion.

American Pharoah ended a 37-year drought in 2015 and now just four years later, racing is celebrating another sweep of the Kentucky Derby, Preakness and Belmont.

Justify won the Belmont starting from the rail. The last Triple Crown from that spot at the Belmont was Secretariat, 45 years ago to the day.

“The raw talent is there,” trainer Bob Baffert said. “He just came on there and broke every curse there was. It was meant to be.”

Justify is just the second horse to capture the Triple Crown undefeated, joining Seattle Slew (1977). Justify, who is 6-0 and is the first horse to sweep the series without racing at age 2, beat nine others to win — more competition than any other Triple Crown winner has beaten in the Belmont. Justify defeated 35 horses across the Kentucky Derby, Preakness and Belmont.

Baffert joins “Sunny Jim” Fitzsimmons as the only trainers to win the Triple Crown twice. Fitzsimmons won in 1930 with Gallant Fox and in 1935 with Omaha. Baffert won in 2015 with American Pharoah.

It was Baffert’s fifth attempt to win the Triple Crown — three more than any other trainer.