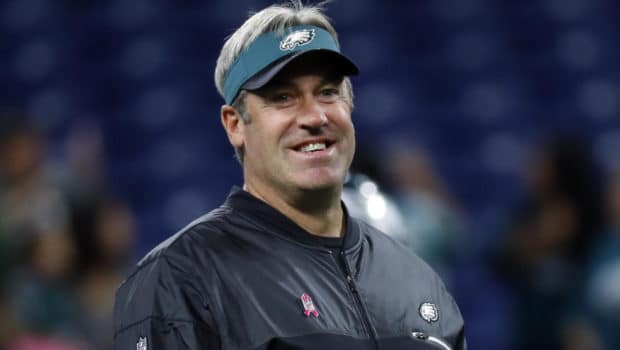 Eagles coach Doug Pederson says that his starters would play against the Oakland Raiders, regardless of the outcomes of other NFL games.

And that included the Vikings defeating the Packers in Green Bay on Saturday night.

Asked if he had specific game plans contingent on clinching, the second-year coach didn’t mince words.

“To win the game,” Pederson deadpanned.

Asked about his season-finale plans, assuming the Eagles have clinched the No. 1 seed before the rival Cowboys come to town on New Year’s Eve, Pederson seemed to suggest starters would still see action.

“Right now, because that’s Week 17, you don’t play for a couple of weeks [because of the first-round bye], I think it’s important to maintain the edge,” he said. “Maintain the aggressiveness. If it’s one play, one series, one quarter, I’ll make that decision at that time.”

Pederson is doing his best to ensure that his team shows up ready to rebound from last Sunday’s disappointing, narrow five-point win over the sad-sack Giants and that his team gets at least one more tune-up before the Eagles await their NFC divisional round opponent on either Jan. 13 or 14.

It’s exactly the approach the Eagles need. Defensively, they haven’t played their best football for the past three weeks, all road games. Having the home crowd rocking should help.

Offensively, the Eagles didn’t miss a beat in their one game with Nick Foles replacing the injured Carson Wentz, even though Foles wasn’t in sync with all his receivers. Foles, who threw four touchdowns against the Giants, needs more game situations to establish that comfort and rapport with his weapons, especially if the Eagles have plans of playing beyond January.

Pederson will undoubtedly rest some starters along the way as soon as his team clinches, in the second halves or earlier. Guys who’ve played excessive snaps this year – safety Malcolm Jenkins, linebacker Nigel Bradham and some offensive linemen – could use a break. But the bigger question is how to handle Foles.