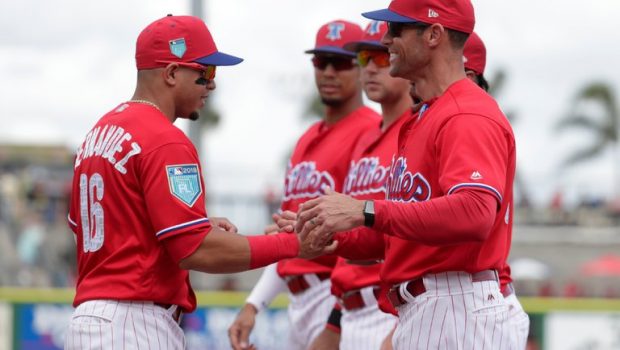 So says the New York Times:

In the first three games, two of them losses, Kapler went to the bullpen a staggering 18 times, including a call to an infielder. In the opener, Kapler pulled starter Aaron Nola from a shutout after just 68 pitches, and the relievers blew the game. On Saturday he summoned the left-hander Hoby Milner to face Freddie Freeman for the third day in a row, but there was one problem — Milner was not actually warming up.

After the game, Kapler said he took responsibility for that mishap, using the word “miscommunication” repeatedly with reporters and emphasizing the “long view.”

One curious series aside, Kapler has long appealed to some of the more astute minds in baseball, including Joe Maddon, who managed Kapler with the Rays and said he had envisioned him as his future bench coach if the opening ever arose. Maddon appreciated Kapler’s bond with teammates and willingness to challenge conventional thought.

Maddon, who now guides the Chicago Cubs, is the original iconoclast among modern managers. His methods played well in the obscurity of Tampa Bay, with a young franchise that had never won before. But Kapler’s first job comes with a flagship National League team in a town that has never seen anyone quite like him. Does he know what awaits him?