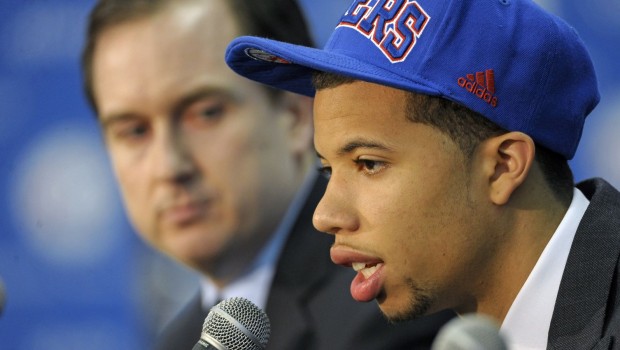 JURY IS OUT ON SIXERS AND HINKIE EXPERIMENT IN ANALYTICS

In 2013 Hinkie drafted Michael Carter-Williams, who turned out to be a point guard who couldn’t shoot or distribute up to NBA standards, so he was traded last week.

Nobody questions the Sixers’ dedication to analytics.

The hiring of numbers guy Sam Hinkie as general manager two years ago attests to the team’s belief that the study of how a player does in every possible situation is as important as the good old eye test.

Not everyone thinks it will be successful. In fact, there are many skeptics who believe that Hinkie’s method won’t turn the Sixers into an elite NBA team for the first time in 30 years.

And here’s ESPN the Magazine’s take on the team:

Philly went all-in on analytics in May 2013, when a new ownership group led by Josh Harris and David Blitzer, who come from a background in private equity, hired Sam Hinkie as GM and president of basketball operations. While assistant GM with the Houston Rockets, Hinkie worked hand in hand with GM Daryl Morey to utilize cutting-edge statistical analysis and exhaust every avenue for building a competitive team.

“I’m trying to use information to make decisions. The same way you do,” Hinkie explained when he was introduced to the media. “You use analytics when you open your iPhone and try to figure out if it’s going to rain today. All you’re using is lots and lots of data, and it’s helping you make an informed decision about whether you should bring an umbrella or not. That’s the way I think about it.”

In some ways, the 76ers are closer than the Rockets to a pure experiment in team-building driven by analytics. Morey inherited a competitive Houston team led by stars Tracy McGrady and Yao Ming, whereas Hinkie is starting from scratch in Philadelphia. While the Rockets rebuilt without falling out of contention, the Sixers’ ownership group signed off on a complete teardown that resulted in a record-tying 26-game losing streak in 2013-14.

All that losing is in the name of long-term benefit, as explained in a recent ESPN The Magazine feature. After acquiring two first-round picks before last week’s trade deadline, Philadelphia could have as many as four in this year’s draft to go with recent lottery picks Joel Embiid, Nerlens Noel and Dario Saric. And the 76ers have stockpiled 15 second-round picks over the next six drafts by renting out their cap space to use in trades while hunting for steals.

Hinkie has surrounded himself with executives with analytics-heavy backgrounds. He hired Ben Falk from the Portland Trail Blazers and Sachin Gupta, formerly of the Rockets, giving both promotions to vice president.

Because the Sixers are still early in the rebuilding process, it’s tough to see the influence of analytics on the court. But under Hinkie’s hand-picked coach, former San Antonio Spurs assistant Brett Brown, Philadelphia is playing a fast pace and getting good shots. Only the New Orleans Pelicans have taken a higher percentage of their attempts at the rim this season, per NBA.com/Stats.