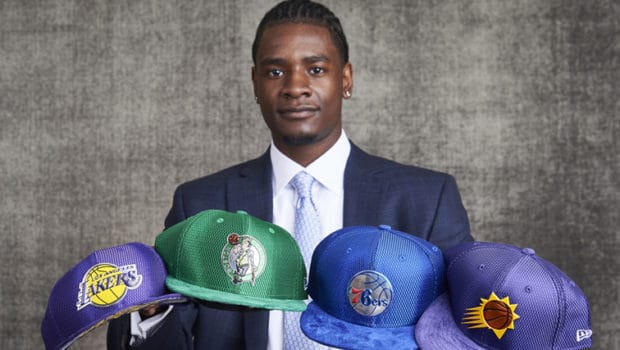 With the commitment to letting Ben Simmons run the offense, the question of how to fill out the nominal guard spots is crucial. Do they want Jackson’s defensive versatility and ability to play multiple offensive roles, or would they rather have a more traditional point guard in De’Aaron Fox?

Only six nights to go before the June 22 NBA draft, and here is your daily mock fix:

The best player in this draft class met with Celtics brass, and all indications suggest he impressed everyone. If his lack of a winning history is holding back Fultz, most of that can be overcome because of the stacked team he should join.

Ultimately, this is going to come down to what the Lakers think of the core they’ve already assembled and the one they are hoping to bring in soon. But Ball is the smart pick because of his amazing passing skills and ability to slide off the ball whenever necessary.

Fox is a terrific fit with the Suns’ youth movement, particularly with fellow Kentucky alumnus Devin Booker. He could allow the Suns to trade Eric Bledsoe while also pushing the tempo to new heights and opening the floor up with his speed.

The Kings would love Fultz, Fox or Ball, which is why they may try to trade up if any of the top three teams want to deal. But Smith is rising again, with interviews and workouts clarifying the roots of his intense attitude, and if the Kings want a point guard, they may not be able to wait until No. 10.

Tatum ranks as high as No. 2 on some draft boards, and he widely is lumped in with Ball, Fox and Jackson in the tier below Fultz. In that sense, he could be a steal for the Magic here. While Tatum lacks the huge upside of Jonathan Isaac, he fits Orlando’s need for scoring and is a much surer thing.

There’s no better blend of team need, player ranking and personality fit than Isaac to the Timberwolves. He would thrive next to Karl-Anthony Towns and Andrew Wiggins while defending in a way that allows them to open up their games.

This pick might be easier if Monk had more experience running point, but within the triangle offense, that has never been a prerequisite. His athleticism and knack for scoring are rare, but the question is about whether he does enough other things well to be more than a sixth man.

Mavericks coach Rick Carlisle is notoriously tough on young point guards, but Ntilikina is the type who might be able to break into his good graces. He’s smart and reserved, and his game exemplifies those characteristics. Labeled a project too often, he could be a rotation player in a year.

The Kings don’t need another 7-footer, but Markkanen stands out as the best player available and a good fit next to any of Sacramento’s collection of young centers. He’s one of the two or three best offensive players in this class and one of the safest picks for that reason.

The Hornets’ recent draft history with 7-foot big men notwithstanding, Collins has the potential to be a very good backup center right away. Charlotte can go in many directions with this pick, but Collins’ mix of upside and efficiency definitely intrigues.

Mitchell is a great athlete who can play both guard spots and has solid defensive instincts. The positional versatility has to intrigue the Pistons, who still are mulling the futures of point guard Reggie Jackson and free agent shooting guard Kentavious Caldwell-Pope.

Any team that drafts Anunoby should be ready for him to sit most or even all of the 2017-18 season. But the Nuggets may be losing Danilo Gallinari, and Anunoby could be a great fit with or without “The Rooster” on a team that prizes positional versatility.

Kennard could leap up as high as the top 10 if he continues impressing teams in workouts. His toughness and handles stood out on top of his calling-card shooting ability. However, the Heat are in flux at every position except point guard and center, so they have many options.

Collins has really impressed in workouts, particularly with 3-point range that he didn’t show in college. His ability to play power forward and center and punish mismatches makes him valuable, and the Blazers could use that flexibility and potential in their crowded-but-mediocre frontcourt.

Jackson took big strides as a shooter last season and fits the Bulls’ preference for proven college draftees. There are doubts about his long-term potential, but if he can remain an elite 3-point shooter, he could be a huge help to the shooting-starved Bulls right away.

The Bucks’ hiring process for their general manager will be important here, but Allen grades out as a lottery-caliber prospect and arguably is the best center in the class. The Bucks would love to find some backcourt help here — Donovan Mitchell would have been perfect — but this guard class is shallow.

The talk around the Pacers is they want a player who can slot next to Myles Turner in the frontcourt of the future. Leaf’s scoring ability combines with a hard-nosed approach to rebounding that should make him one of the safest selections of the draft and a good complementary piece for Turner’s rising star.

New Hawks general manager Travis Schlenk’s first mission will be to restock this roster with talented players. Giles’ injury concerns have dropped him at least 10 spots and slightly diminished his athleticism, but he still has the skilled and diverse game that put him atop recruiting rankings.

Though he’s 7-2 and from Latvia, Pasecniks isn’t Kristaps Porzingis. He lacks his countryman’s guard skills, but Pasecniks shows great aggressiveness and skill in attacking. He needs to add strength, but Pasecniks is one of the most intriguing players in this class.

Ferguson hasn’t wowed teams so far in the process, which shouldn’t be surprising after his dud of a season in Australia. Still, his combination of size, athleticism and 3-point shooting make him a perfect candidate for a patient team in need of a 3-and-D wing player.

The Nets are not necessarily looking to move on from Brook Lopez yet, but his long-term future with the team is questionable. Adebayo at once gives the Nets a very modern-style NBA big man with potential to be a starting center and the ability to play next to Lopez in bigger lineups.

The most versatile defender in the draft, Bell has the coveted switching ability that should allow him to defend nearly any type of player. Raptors general manager Masai Ujiri has long loved these types of versatile players, and Bell could be playable even for a good team by the end of his rookie season.

The Jazz denied that they had guaranteed Wilson a spot with the 30th pick in the first round, which might be a good thing from a semantics point of view: He probably wouldn’t be available at 30. After a red-hot March, Wilson caught the eyes of many executives as a perfect lanky stretch-four.

The new regime in Orlando is led by two executives, Jeff Weltman and John Hammond, known for risky but brilliant draft selections. Anigbogu is intriguing because he has the tools to become a dominant defender but almost no track record — even as a five-star high schooler — of doing it.

There’s no way a team with as crowded a rotation as Portland should keep all three of its first-rounders, but if they do, don’t be surprised if they’re the team to snag Evans, the only point guard worthy of being a non-lottery first-rounder.

Jackson’s ability to play both guard spots can be a bit overstated; he’s really a scorer no matter where he’s slotted. But the combine proved he has the athleticism and size to handle a lot, and teams are willing to overlook his shaky college play because of his upside and the dearth of guards in this class.

Rabb cost himself a lot of money by returning to Cal for his sophomore year despite being a possible lottery pick last season. Still, the Lakers could use some further help inside, and his athleticism would be a nice complement to a faster pace with Ball in tow.

The Spurs are impossible to predict on draft night, but Lessort, who has been on scouts’ radars for years, fits their preference. He’s strong and works hard, and he should be able to play center right away even at 6-9. He’s not the athlete of ex-teammate Clint Capela, but his impact could be similar.

Some have pegged White as the best guard outside of lottery range because he does everything well. He has the size and skill to play either backcourt spot and the speed to be a lock-down defender. The Jazz may go with a stash player here, but White could help them right away.