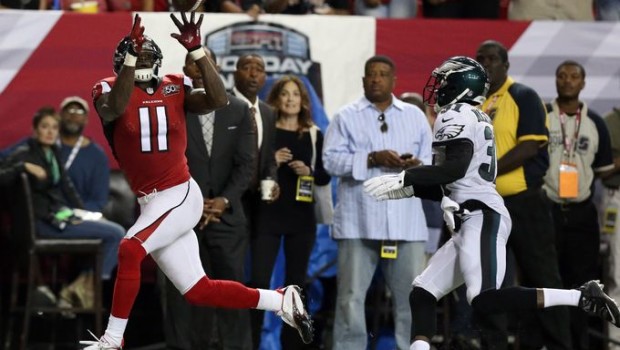 This is what the Eagles paid $66 million for?

Last night in Atlanta, Falcons’ might burner Julio Jones made Byron Maxwell look like the most overpaid cornerback in the NFL.

“What did he have?” Maxwell asked reporters about Jones.

Maxwell signed a $66 million contract with the Eagles to prevent receivers, even those as good as Jones, from having those kind of days.

“Julio is a great player,” Maxwell said. “He’s big. He’s strong. He’s fast. This was my first time going against him. He’s a big, strong dude.”

All summer through training camp the Eagles, from coordinator Billy Davis to each of his players, preached how they were not going to allow big plays this year, the kind that killed them last year.

And then Monday night and Julio Jones happened.

“We have to be better,” Maxwell said. “We have to go back to the drawing board. It’s really kind of simple. We have to stay focused and stay disciplined. Things happen in this game, you have to adjust.”

The Eagles made adjustments at halftime, Monday, as the erased a 17-point deficit. Jones had eight catches for 97 yards at the half, and was held in check from there. Until he caught a 44-yarder in the fourth quarter that led to what proved to be the game-winning field goal.