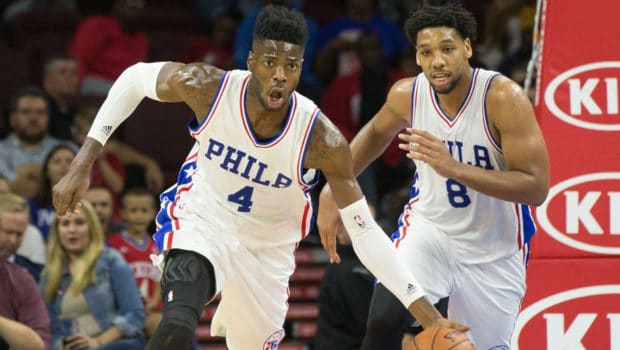 JOY TO THE WORLD! SIXER NERLENS NOEL GETS A BIG CHEER!

There was an unusual sighting last night at the Wells.

Nerlens Noel actually set foot on the court during the Sixers-Pelicans game.

With Joel Embiid fighting foul trouble, Noel’s opportunity came. When subbing in with 6:49 remaining in the third quarter, the Kentucky product received a rousing ovation from the crowd of 16,322.

“I just really want to thank the fans for how they have supported me through thick and thin through this whole process,” Noel said.

It was his third game of the season. Groin and knee injuries prevented him from getting on the floor in October and November. In his season debut December 10th at Detroit, Noel sustained a left ankle sprain.

“I definitely felt the presence that the fans have once I entered the game,” he said. “They got me going, especially knocked off all those little nerves. I was able to go in there and do my thing.”

Indeed Noel did. He was an energetic, impactful body around the basket, converting both of his field goal tries for four points. The fourth-year center pulled down three rebounds, two of which were on the offensive glass.