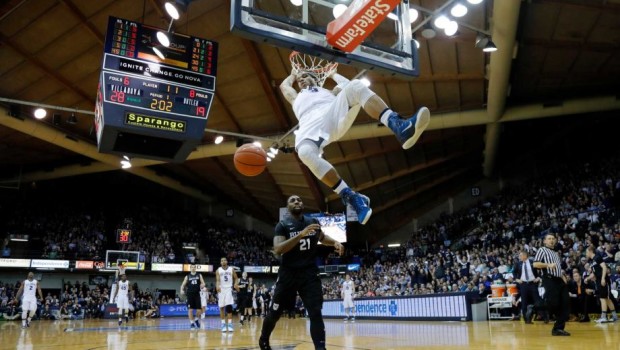 Villanova had a struggle on its hands Saturday in its game with Butler, but in the end it had Hart.

It was the first time in Villanova history that a No. 1 team played at the Pavilion, the Wildcats’ on-campus home.

Hart, Villanova’s leading scorer at 14.8 points per game, struggled in the last two contests, scoring a combined 11 points on 3-for-15 shooting in wins over St. John’s and Temple. But he came alive against Butler, particularly in the second half when he scored 13 points.

Butler erased a nine-point halftime deficit and took a 37-36 lead with a 12-2 run over the first 4:49 of the second half. Martin had eight points during the Bulldogs’ spurt that was helped by Villanova missing its first five shots of the half.

And the Bulldogs still had the lead, 45-43, with 11:04 left when Andrew Chrabascz scored on a layup before Villanova’s offense picked up.

Jenkins and Hart combined on the next 16 Wildcats points and Hart’s 3 with 7:18 remaining put Villanova ahead 59-51. The Bulldogs never got closer than six points the rest of the way.

Hart finished 8 for 16 from the field, including 3 for 8 from the behind arc.

Hart’s turnaround jumper as the shot clock expired with 8 seconds left in the half gave Villanova its largest lead, 34-22. But the Bulldogs quickly got the ball up court and Martin drained a 3-pointer from the left wing as time expired to trim Villanova’s lead to 34-25.

Ryan Arcidiacono and Daniel Ochefu were honored before the game, along with Villanova’s other seniors, on Senior Day. The duo has been part of 106 victories, the most by a single class in program history.

The Wildcats improved to 7-0 all-time against Butler. . Villanova won its 37th straight game at the Pavilion, where it is 281-61 all-time. . the Wildcats swept the season series, defeating the Bulldogs 60-55 on Jan. 10 at Butler.