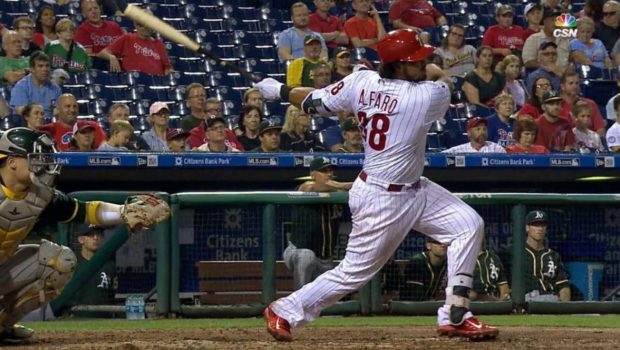 JORGE LIFTS PHILS PAST A’S AND STAKES HIS CATCHER CLAIM FOR ’18!

Jorge Alfaro homered to lead the Phillies over the Oakland Athletics 5-2.

“I’m just trying not to put too much pressure on myself, just have fun, compete and help the team,” Alfaro said.

Acquired as part of the Phillies’ 2015 trade with Texas that sent Cole Hamels to the Rangers, Alfaro is batting .317 with four homers and 11 RBI in 21 games since his call-up Aug. 5 from Triple-A Lehigh Valley.

“I really like what I see,” Phillies manager Pete Mackanin said. “I think he’s going to hit here. I’m most pleased with his game-calling.”

Alfaro has spent this season focusing on becoming a better backstop.

“That’s all I’m thinking about,” he said of his defense.

J.P. Crawford had two RBI and Cesar Hernandez also drove in a run for the Phillies, who improved to 5-14 against the AL.

Matt Olson and Jed Lowrie homered for Oakland, which lost for just the third time in its last 10.

The game was delayed 1 hour, 46 minutes by rain during the third inning.

Hector Neris pitched the ninth for his 21st save in 24 chances to cap an impressive performance by the Phils’ bullpen. Neris gave up a solo shot to Lowrie, but Yacksel Rios, Victor Arano, Hoby Milner, Edubray Ramos and Luis Garcia didn’t allow a hit over five scoreless innings.

The Athletics jumped to a 2-0 lead in the second. Olson led off with his 20th homer, a solo shot to right. Boog Powell drove in the other run with a sacrifice fly.

The Phillies got a run back in the third on Hernandez’s two-out RBI single, and they tied it up an inning later on Crawford’s RBI single to right.

Alfaro snapped the tie with a two-run drive to straightaway center that made it 4-2.

“I’m just seeing the ball well,” Alfaro said. “I tried to hit the ball to the gap. I’m just trying to help the team.”

The Phillies tacked on a run in the eighth on Crawford’s sacrifice fly.