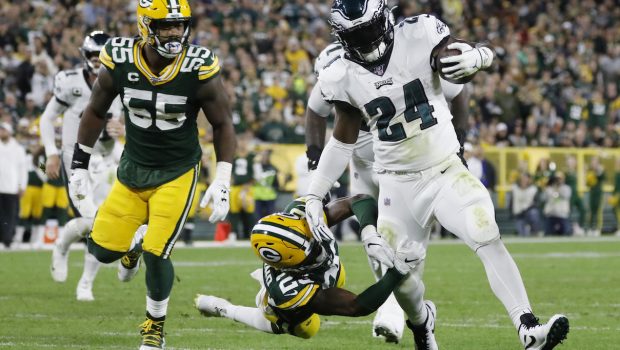 JORDAN HOWARD EMERGES AS THE EAGLES LEAD RUNNING BACK!

Miles Sanders has gotten off to a great start in the Eagles backfield, where the rook has been sharing time with vet Jordan Howard.

But now it’s time for a decision, and Eagles coach Doug Pederson is leaning to Howard as a lead back.

Despite sharing the workload with Sanders this season, Howard has been serving as the complementary option in the backfield. It seems he is now primed to take over as the lead back after outplaying the rookie in recent weeks.

Howard enjoyed an efficient day against the Jets with 62 yards and a touchdown on 13 carries. Meanwhile, Sanders struggled to get anything going after mustering up only 15 yards on nine carries. The difference in their performance clearly has Pederson reconsidering the pecking order in the backfield.

Although Sanders did not find much success on the ground, he did flash his prowess as a receiver with four catches for 49 yards. Given their skill sets, Howard could be tasked with handling the early-down work while the rookie fills in during passing situations. The onus is ultimately on Pederson to make the most out of his current weapons in the backfield.

All signs point to Howard becoming the bell-cow back if he can continue to be productive.