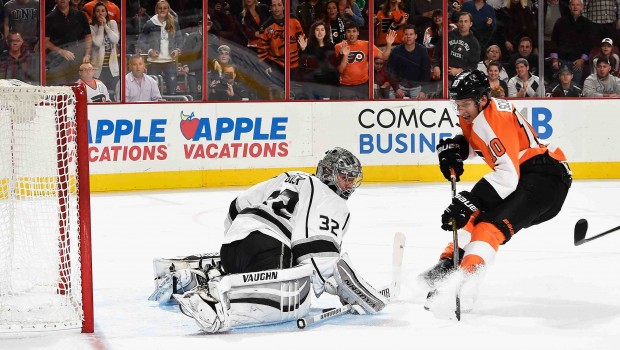 Schenn beats Quick for the game-winner.

On the road shooting for a seventh straight win, facing the Flyers at the Wells Fargo Center

“We didn’t have a great first [period], fought our way back into it and you kind of get the game taken away from you in overtime,” Kings goalie Jonathan Quick told the Los Angeles Times.

This was a subdued but simmering Quick who earned a 10-minute misconduct when he smashed and tossed his stick after Philly beat the Kings, 3-2, in overtime on Tuesday night at Wells Fargo Center. Flyers forward Brayden Schenn scored at 2:36 and it was initially waved off but later ruled a good goal.

Quick and Kings Coach Darryl Sutter felt Quick was pushed into the net by Schenn.

“I know I was,” Quick said. “I didn’t feel. I know. That should be no goal. I don’t know how it goes upstairs. Still they get it wrong. I don’t know the exact ruling on that because they seem to change it every year. Usually you’re not allowed to push a goalie into the net. Maybe they changed it again on us.”

Sutter said less but the sentiment was the same. “It was contact, so shouldn’t be a goal,” he said.

The NHL’s situation room released a statement, saying, in part: “The original call by the referee closest to the Kings net was ‘no goal’ but after the four on-ice officials huddled, the call on the ice was changed to ‘good goal.’ Video review supported the final on-ice decision that the puck crossed the Kings goal line on the original shot by Brayden Schenn.”