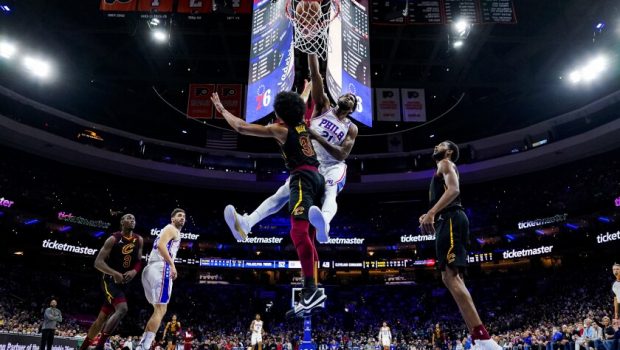 JOJO’S TRIP-DOUB AND THUNDEROUS DUNK BROUGHT DOWN THE HOUSE — AND THE CAVS!

Joel Embiid once again showed why he is the NBA’s MVP and showed the Cleveland Cavs that they might not be as good as they think they are.

The Sixers are awaiting the debut of James Harden, who was acquired before the trade deadline.

Tyrese Maxey added 16 points for Philadelphia, which has won both games since Thursday’s blockbuster trade that sent disgruntled Ben Simmons to Brooklyn for Harden.

Harden arrived in Philadelphia on Saturday, and 76ers general manager Daryl Morey posted a video on social media of his airport embrace with the three-time NBA scoring champion. Harden was evaluated by the team’s medical staff on Saturday, but not present at the arena for the game. Fans cheered loudly when a video showing Harden highlights, which ended with him in a photoshopped 76ers jersey, was posted on the video screen for the second straight night.

Embiid’s first-half dunk also got plenty of play on the big board. The 7-foot MVP candidate brought the house down with 1:47 left in the first half with a one-handed throw-down over Jarrett Allen that had fans – and even players – putting their hands to their heads.

He posted a picture of the dunk on his social media accounts.

“It was crazy, it was cool,” Embiid said. “I was finally able to make my dreams come true.”

The already electric atmosphere in Philadelphia created by Embiid’s presence and nightly “M-V-P! M-V-P!” chants is going to ramp up even more when Harden takes the court, which could be as early as Tuesday’s home game against Boston. Philadelphia also plays Thursday at Milwaukee before a hiatus for the All-Star break.

The 76ers looked good without Harden against upstart Cleveland, which entered the contest one game back of first place in the Eastern Conference but played catch-up all night.

Philadelphia came out firing, making 11 of its first 14 shots, to double up the Cavs, 30-15 in the early going. The Cavs did manage to go up two points in the third quarter, but Embiid was just too much and Philadelphia pulled away during crunch time.

“Every team that is in front of you, you always want to see where we’re at,” Embiid said. “Good to get this first one in and see how we compare to them.”

The defeat was a good lesson for the Cavaliers, according to coach J.B. Bickerstaff.

“The intensity at which you’re going to have to play at in order to compete with teams like this,” he said. “It was a clear message from the beginning of the game the intensity they were coming with. These are the tests we talk about and these are the lessons we have to learn. It’s a matter of playing with force and playing with speed.”