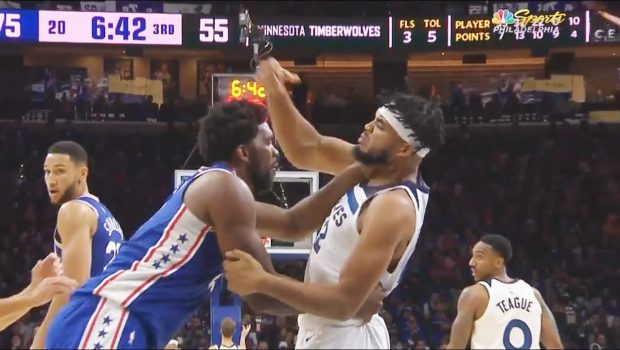 JOJO’S FIGHT WITH KAT MAY BE THE SIXERS SEASON HIGHLIGHT!

The October 30 game was halted and a WWE match ensued at the Wells Fargo Center.

Karl-Anthony Towns shoved Joel Embiid. Embiid shoved back. Towns swung at Embiid, who ducked it like a scene from The Matrix. Embiid jabbed at Towns. Then Ben Simmons put Towns in a choke hold as Embiid and KAT were separated by referees and coaches from both teams.

While he was being restrained, Embiid motioned to the Sixers crowd, hyping up the fracas. It was an enchanting moment, a swirl of ecstasy accompanying the enraged antics on the court, and a delightful arrangement of several things Philadelphians crave from their athletics: drama, flair, violence, and victory. In pure Philly fashion, the pugnacity continued even after Towns and Embiid were escorted to their respective locker rooms. Embiid took a victory lap on Instagram after the game, proclaiming that he owned “real estate” in Towns’s head. His teammate Mike Scott jokingly posted a picture on his Instagram of his entrance to the Wells Fargo Center and set the location as “UFC Philly.”